Time's up for Jodie 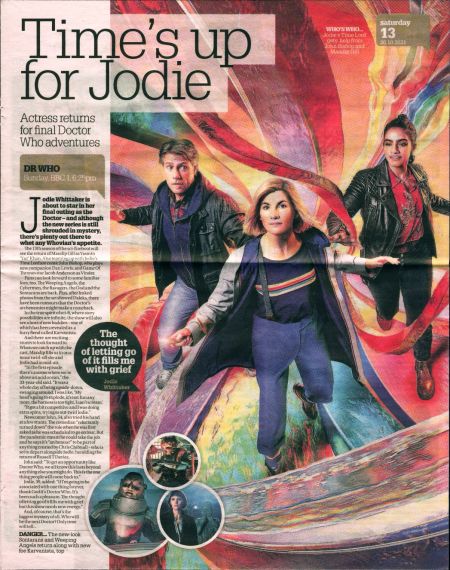 Jodie Whittaker is about to star in her final outing as the Doctor - and although the new series is still shrouded in mystery, there's plenty out there to whet any Whovian's appetite.

The 13th season of the sci-fi reboot will see the return of Mandip Gill as Yasmin 'Yaz' Khan. Also teaming up with Jodie's Time Lord are comic John Bishop, who plays new companion Dan Lewis, and Game Of Thrones star Jacob Anderson as Vinder.

Fans can look forward to some familiar foes, too. The Weeping Angels, the Cybermen, the Ravagers, the Ood and the Sontarans are back. Plus, after leaked photos from the set showed Daleks, there have been rumours that the Doctor's archenemies might make a comeback.

In the true spirit of sci-fi, where story possibilities are infinite, the show will also see a host of new baddies - one of which has been revealed as a furry fiend called Karvanista.

And there are exciting stunts to look forward to. When we catch up with the cast, Mandip fills us in on a tense twirl-off she and Jodie had in mid-air.

"In the first episode With there's a scene where we're above an acid ocean," the 33-year-old said. "It was a whole day of being upside-down, swinging around. I was like, 'My head's going to explode, it's not fun any more, the harness is too tight, I can't scream'.

"It got a bit competitive and I was doing extra spins, trying to out-twirl Jodie."

Newcomer John, 54, also tried his hand at a few stunts. The comedian "reluctantly turned down" the role when he was first asked as he was scheduled to go on tour. But the pandemic meant he could take the job and he says it's "an honour" to be part of anything created by Chris Chibnall - who is set to depart alongside Jodie, heralding the return of Russell T Davies.

John said: "To get an opportunity like Doctor Who, we all know this lasts beyond anything else you might do. This is the one thing people will come back to."

Jodie, 39, added: "If I'm going to be associated with one thing forever, thank God it's Doctor Who. It's been such a pleasure. The thought of letting go of it fills me with grief but this show needs new energy."

And, of course, that's the biggest mystery of all. Who will be the next Doctor? Only time will tell...

Caption: WHO'S WHO... Jodie's Time Lord gets help from John Bishop and Mandip Gill