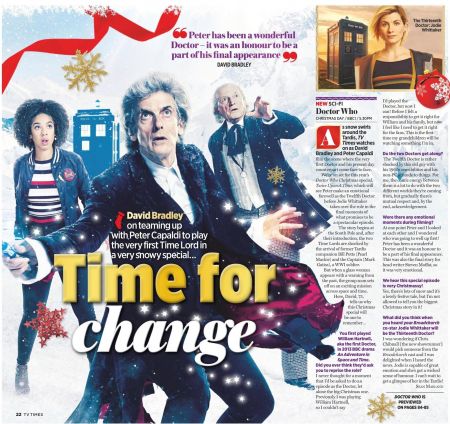 David Bradley on teaming up with. Peter Capaldi to play the very first Time Lord in a very snowy special...

As snow swirls around the Tardis, TV Times watches on as David Bradley and Peter Capaldi film the scene where the very first Doctor and his present day counterpart come face to face.

We're on set for this year's Doctor Who Christmas special, Twice Upon A Time, which will see Peter make an emotional farewell as the Twelfth Doctor before Jodie Whittaker takes over the role in the final moments of what promises to be a spectacular episode.

The story begins at the South Pole and, after their introduction, the two Time Lords are shocked by the arrival of former Tardis companion Bill Potts (Pearl Mackie) and the Captain (Mark Gatiss), a WWI soldier.

But when a glass woman appears with a warning from the past, the group soon sets off on an exciting mission across space and time.

Here David, 75, tells us why this Christmas special will be one to remember...

You first played William Hartnell, aka the first Doctor, in 2013 BBC drama An Adventure in Space and Time. Did you ever think they'd ask you to reprise the role?

I never thought for a moment that I'd be asked to do an episode as the Doctor, let alone the big Christmas one. Previously I was playing William Hartnell, so I couldn't say I'd played the Doctor, but now I can! Before I felt a responsibility to get it right for William and his family, but now I feel like I need to get it right for the fans. This is the first time my grandchildren will be watching something I'm in.

Do the two Doctors get along?

The Twelfth Doctor is rather shocked by this old guy with his 1960s sensibilities and his non-PC attitude to things. For me, the comic energy between them is a lot to do with the two different worlds they're coming from, but gradually there's mutual respect and, by the end, acknowledgement.

Were there any emotional moments during filming?

At one point Peter and I looked at each other and I wondered who was going to well up first! Peter has been a wonderful Doctor and it was an honour to be a part of his final appearance. This was also the final story for head writer Steven Moffat, so it was very emotional.

We hear this special episode is very Christmassy!

Yes, there's lots of snow and it's a lovely festive tale, but I'm not allowed to tell you the biggest Christmas story in it!

What did you think when you heard your Broadchurch co-star Jodie Whittaker will be the Thirteenth Doctor?

I was wondering if Chris Chibnall [the new showrunner] would pick someone from the Broadchurch cast and I was delighted when I heard the news. Jodie is capable of great emotion and she's got a wicked sense of humour. I can't wait to get a glimpse of her in the Tardis!

DOCTOR WHO IS PREVIEWED ON PAGES 84-85 NEW DRAMA