Torchwood does sci-fi with attitude 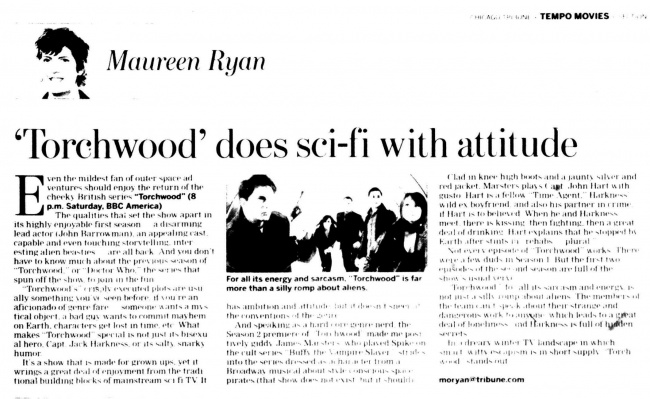 Even the mildest fan of outer space adventures should enjoy the return of the cheeky British series "Torchwood" (8 p.m. Saturday, BBC America).

The qualities that set the show apart in its highly enjoyable first season -- a disarming lead actor (John Barrowman), an appealing cast, capable and even touching storytelling, interesting alien beasties -- are all back. And you don't have to know much about the previous season of "Torchwood," or "Doctor Who," the series that spun off the show, to join in the fun.

"Torchwood's" crisply executed plots are usually something you've seen before, if you're an aficionado of genre fare -- someone wants a mystical object, a bad guy wants to commit mayhem on Earth, characters get lost in time, etc. What makes "Torchwood" special is not just its bisexual hero, Capt. Jack Harkness, or its salty, snarky humor.

It's a show that is made for grown-ups, yet it wrings a great deal of enjoyment from the traditional building blocks of mainstream sci-fi TV. It has ambition and attitude, but it doesn't sneer at the conventions of the genre.

And speaking as a hard-core genre nerd, the Season 2 premiere of "Torchwood" made me positively giddy. James Marsters, who played Spike on the cult series "Buffy the Vampire Slayer," strides into the series dressed as acharacter from a Broadway musical about style-conscious space pirates (that show does not exist, but it should).

Clad in knee-high boots and a jaunty silver-and-red jacket, Marsters plays Capt. John Hart with gusto. Hart is a fellow "Time Agent," Harkness' wild ex-boyfriend, and also his partner in crime, if Hart is to believed. When he and Harkness meet, there is kissing, then fighting, then a great deal of drinking. Hart explains that he stopped by Earth after stints in "rehabs -- plural."

Not every episode of "Torchwood" works: There were a few duds in Season 1. But the first two episodes of the second season are full of the show's usual verve.

"Torchwood," for all its sarcasm and energy, is not just a silly romp about aliens. The members of the team can't speak about their strange and dangerous work to anyone, which leads to a great deal of loneliness, and Harkness is full of hidden secrets.

In a dreary winter TV landscape in which smart, witty escapism is in short supply, "Torchwood" stands out.

Caption: Photo: For all its energy and sarcasm, "Torchwood" is far more than a silly romp about aliens.