Who's a busy boy! 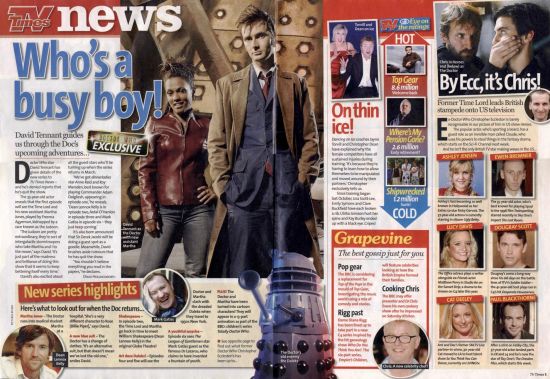 David Tennant guides us through the Doc's upcoming adventures...

Doctor Who star David Tennant has given details of the new series to TV Times News-and he's denied reports that he's quit the show.

The 35-year-old actor reveals that the first episode will see the Time Lord and his new assistant Martha Jones, played by Freema Agyeman, kidnapped by a race known as the Judoon.

'The Judoon are pretty extraordinary, they're sort of intergalactic stormtroopers who take Martha and Ito the moon,' says David. 'It's just part of the madness and brilliance of doing this show that it seems to keep bettering itself every time'

David's also excited about all the guest stars who'll be turning up when the series returns in March.

It's also been announced that Sir Derek Jacobi will be doing a guest spot as a goodie. Meanwhile, David brushes aside rumours that he has quit the show.

'You shouldn't believe everything you read in the papers,' he declares.

Caption: David Tennant as the Doctor - with new assistant Martha

A new blue suit - The Doctor has a change of clothes. 'It's an alternative suit, but that doesn't mean we've lost the old one,' smiles David.

Shakespeare - In episode two, the Time Lord and Martha go back in time to meet William Shakespeare (Dean Lennox Kelly) in the original Globe Theatre!

Art deco Daleks! - Episodes four and five will see the Doctor and Martha clash with the dreaded Daleks when they travel to 19305 New York.

A youthful surprise - Episode six sees The League of Gentlemen star Mark Gatiss guest as the famous Dr Lazarus, who claims to have invented a fountain of youth.

PLUS! The Doctor and Martha have been turned into cartoon characters! They will appear in a 13-part animation as part of the BBC1 children's series Totally Doctor Who.

See opposite page to find out what former Doctor Who Christopher Eccleston's has been up to...

Ex-Doctor Who Christopher Eccleston is barely recognisable in our picture of him in US show Heroes. The popular actor, who's sporting a beard, has a guest role as an invisible man called Claude, who uses his powers to steal things in the fantasy drama, which starts on the Sci-Fi Channel next week.

And he isn't the only British TV star making waves in the US...

Caption: Chris in Heroes and (below) as The Doctor