Who's after all those jelly babies? 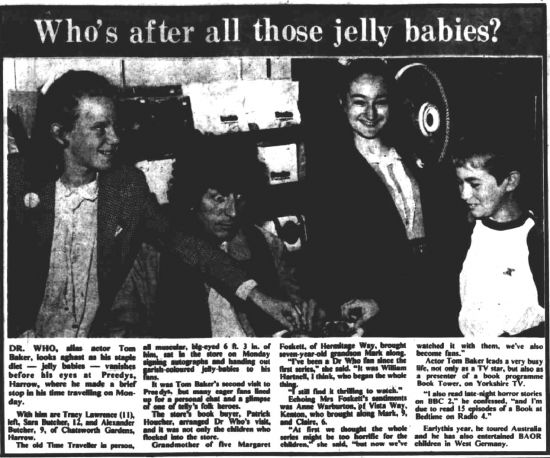 Dr. Who, alias actor Tom Baker, looks aghast as his staple diet - jelly babies - vanishes before his eyes at Preedys, Harrow, where he made a brief stop in his time travelling on Monday.

With him are Tracy Lawrence (11), left, Sara Butcher, 12, and Alexander Butcher, 9, of Chatsworth Gardens, Harrow.

The old Time Traveler in person, all muscular, big-eyed 6 ft. 3 in. him, sat in the store on Monday signing autographs and handing out garish-coloured jelly-babies to his fans.

It was Tom Baker's second visit too Preedys, but many eager fans faced up for a personal chat and a glimpse of one of telly's folk heroes.

The store's book buyer, Patrick Houcher, arranged Dr. Who's visit, and it was not only the children who flocked into the store.

"I've been a Dr. Who fan since the first series," she said. "It was William Hartnell, I think, who began the whole thing.

"I still find it thrilling to watch."

"At first we thought the whole series might be too horrific for the children," she said, "but now we've also become fans."

Actor Tom Baker leads a very busy life, not only as a TV star, but also as a presenter of a book programme Book Tower, on Yorkshire TV.

"I also read late night horror stories on BBC 2," he confessed," and I'd due to read 15 episodes of a Book at Bedtime on Radio 4."

Early this year, he toured Australia and he has also entertained BAOR children in West Germany.