Who the man..new Doc is wheelie cool 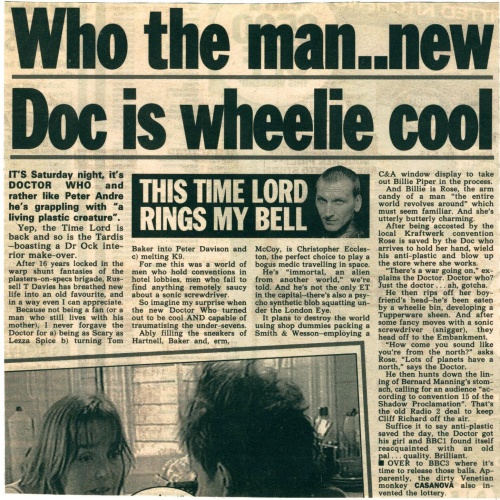 THIS Time Lord RINGS MY BELL

IT'S Saturday night, it's DOCTOR WHO and rather like Peter Andre he's grappling with "a living plastic creature".

Yep, the Time Lord is back and so is the Tardis —boasting a Dr Ock interior make-over.

After 16 years locked in the warp shunt fantasies of the plasters-on-specs brigade, Russell T Davies has breathed new life into an old favourite, and in a way even I can appreciate.

Because not being a fan (or a man who still lives with his mother). I never forgave the Doctor for a) being as Scary as Lezza Spice b) turning Tom Baker into Peter Davison and c) melting K9.

For me this was a world of men who hold conventions in hotel lobbies, men who fail to find anything remotely saucy about a sonic screwdriver.

So imagine my surprise when the new Doctor Who turned out to be cool AND capable of traumatising the under-sevens.

Ably filling the sneakers of Hartnell, Baker and, erm, McCoy, is Christopher Eccleston, the perfect choice to play a bogus medic travelling in space.

He's "immortal, an alien from another world," we're told. And he's not the only ET in the capital—there's also a psycho synthetic blob squatting under the London Eye.

It plans to destroy the world using shop dummies packing a Smith & Wesson—employing a C&A window display to take out Billie Piper in the process.

And Billie is Rose, the arm candy of a man "the entire world revolves around" which must seem familiar. And she's utterly butterly charming.

After being accosted by the local Kraftwerk convention Rose is saved by the Doc who arrives to hold her hand, wield his anti-plastic and blow up the store where she works.

"There's a war going on," explains the Doctor. Doctor who? Just the doctor ... ah, gotcha.

He then rips off her boyfriend's head—he's been eaten by a wheelie bin, developing a Tupperware sheen. And after some fancy moves with a sonic screwdriver (snigger), they head off to the Embankment.

"How come you sound like you're from the north?" asks Rose. "Lots of planets have a north," says the Doctor.

He then hunts down the lining of Bernard Manning's stomach, calling for an audience "according to convention 15 of the Shadow Proclamation". That's the old Radio 2 deal to keep Cliff Richard off the air.

Suffice it to say anti-plastic saved the day, the Doctor got his girl and BBC1 found itself reacquainted with an old pal ... quality. Brilliant.