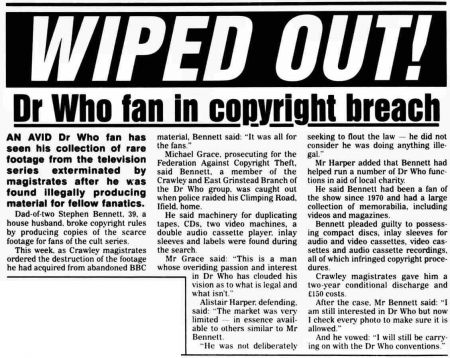 Dr Who fan in copyright breach

AN AVID Dr Who fan has seen his collection of rare footage from the television series exterminated by magistrates after he was found illegally producing material for fellow fanatics.

Dad-of-two Stephen Bennett, 39, a house husband, broke copyright rules by producing copies of the scarce footage for fans of the cult series. This week, as Crawley magistrates ordered the destruction of the footage he had acquired from abandoned BBC material, Bennett said: "It was all for the fans."

Michael Grace, prosecuting for the Federation Against Copyright Theft, said Bennett, a member of the Crawley and East Grinstead Branch of the Dr Who group, was caught out when police raided his Climping Road, Ifield home.

Mr Grace said: "This is a man whose overiding passion and interest in Dr Who has clouded his vision as to what is legal and what isn't."

Alistair Harper. defending. said: "The market was very limited -- in essence avail. able to others similar to Mr Bennett.

"He was nut deliberately seeking to flout the law — he did not consider he was doing anything We-gal."

Mr Harper added that Bennett had helped run a number of Dr Who functions in aid of local charity.

He said Bennett had been a fan of the show since 1970 and had a large collection of memorabilia, including videos and magazines.

Crawley magistrates gave him a two-year conditional discharge and £150 costs.

After the case. Mr Bennett said: "I am still interested in Dr Who but now I check every photo to make sure it is allowed."

And he vowed: "I will still be carrying on with the Dr Who conventions."