You know Who (London Evening Standard) 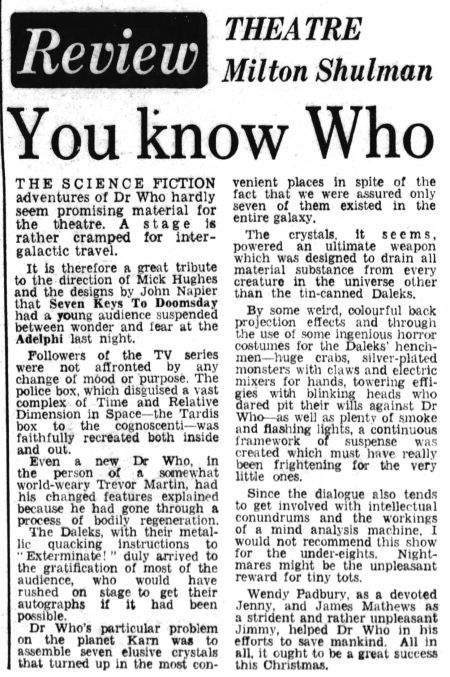 THE SCIENCE FICTION adventures of Dr Who hardly seem promising material for the theatre. A stage is rather cramped for intergalactic travel.

It is therefore a great tribute to the direction of Mick Hughes and the designs by John Napier that Seven Keys To Doomsday had a young audience suspended between wonder and fear at the Adelphi last night.

Followers of the TV series were not affronted by any change of mood or purpose. The police box, which disguised a vast complex of Time and Relative Dimension in Space—the Tardis box to the cognoscenti—was faithfully recreated both inside and out.

Even a new Dr Who, in the person of a somewhat world-weary Trevor Martin, had his changed features explained because he had gone through a process of bodily regeneration.

The Daleks, with their metallic quacking instructions to "Exterminate!" duly arrived to the gratification of most of the audience, who would have rushed on stage to get their autographs if it had been possible.

Dr Who's particular problem on the planet Karn was to assemble seven elusive crystals that turned up in the most convenient places in spite of the fact that we were assured only seven of them existed in the entire galaxy.

The crystals, it seems, powered an ultimate weapon which was designed to drain all material substance from every creature in the universe other than the tin-canned Daleks.

By some weird, colourful back projection effects and through the use of some ingenious horror costumes for the Daleks' henchmen—huge crabs, silver-plated monsters with claws and electric mixers for hands, towering effigies with blinking heads who dared pit their wills against Dr Who—as well as plenty of smoke and flashing lights, a continuous framework of suspense was created which must have really been frightening for the very little ones.

Since the dialogue also tends to get involved with intellectual conundrums and the workings of a mind analysis machine, I would not recommend this show for the under-eights. Nightmares might be the unpleasant reward for tiny tots.

Wendy Padbury, as a devoted Jenny, and James Mathews as a strident and rather unpleasant Jimmy, helped Dr Who in his efforts to save mankind. All in all, it ought to be a great success this Christmas.