10 Out Of This World Things About Doctor Who's Tardis 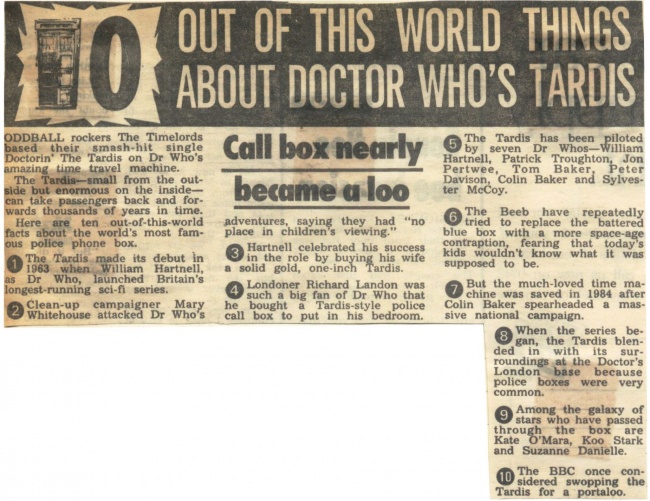 ODDBALL rockers The Timelords based their smash-hit single Doctorin' The Tardis on Dr Who's amazing tune travel machine.

The Tardis—small from the outside but enormous on the inside—can take passengers back and forwards thousands of years in time.

Here are ten out-of-this-world facts about the world's most famous police phone box.

1 The Tardis made its debut in 1963 when William Hartnell, as Dr Who, launched Britain's longest-running sci-fi series.

2 "Clean-up campaigner Mary Whitehouse attacked Dr Who's adventures, saying they had "no place in children's viewing."

3 Hartnell celebrated his success in the role by buying his wife a solid gold, one-inch Tardis.

4 Londoner Richard Landon was such a big fan of Dr Who that he bought a Tardis-style police call box to put in his bedroom.

6 The Beeb have repeatedly tried to replace the battered blue box with a more space-age contraption, fearing that today's kids wouldn't know what it was supposed to be.

7 But the much-loved time machine was saved in 1984 after Colin Baker spearheaded a massive national campaign.

8 When the series began, the Tardis blended in with its surroundings at the Doctor's London base because police boxes were very common.

9 Among the galaxy of stars who have passed through the box are Kate O'Mara, Koo Stark and Suzanne Danielle.

10 The BBC once considered swopping the Tardis for a portaloo.