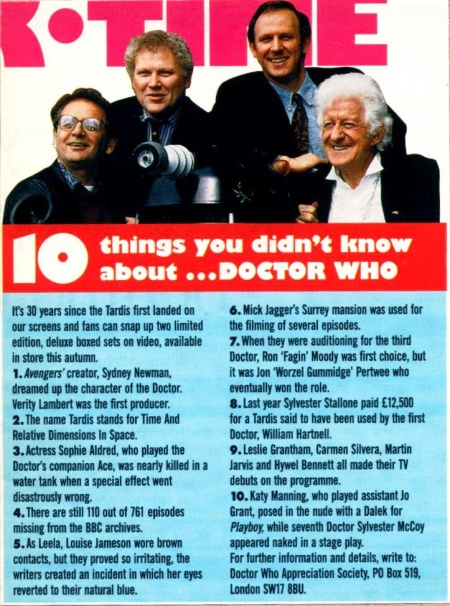 It's 30 years since the Tardis first landed on our screens and fans can snap up two limited edition, deluxe boxed sets on video, available in store this autumn.

1. Avengers' creator, Sydney Newman, dreamed up the character of the Doctor. Verity Lambert was the first producer.

2. The name Tardis stands for Time And Relative Dimensions In Space.

3. Actress Sophie Aldred, who played the Doctor's companion Ace, was nearly killed in a water tank when a special effect went disastrously wrong.

5. As Leela, Louise Jameson wore brown contacts, but they proved so irritating, the writers created an incident in which her eyes reverted to their natural blue.

6. Mick Jagger's Surrey mansion was used for the filming of several episodes.

7. When they were auditioning for the third Doctor, Ron 'Fagin' Moody was first choice, but it was Jon 'Worzel Gummidge' Pertwee who eventually won the role.

8. Last year Sylvester Stallone paid £12,500 for a Tardis said to have been used by the first Doctor, William Hartnell.

9. Leslie Grantham, Carmen Silvera, Martin Jarvis and Hywel Bennett all made their TV debuts on the programme.

10. Katy Manning, who played assistant Jo Grant, posed in the nude with a Dalek for Playboy, while seventh Doctor Sylvester McCoy appeared naked in a stage play.