138m Doctor Who fans travel back in time 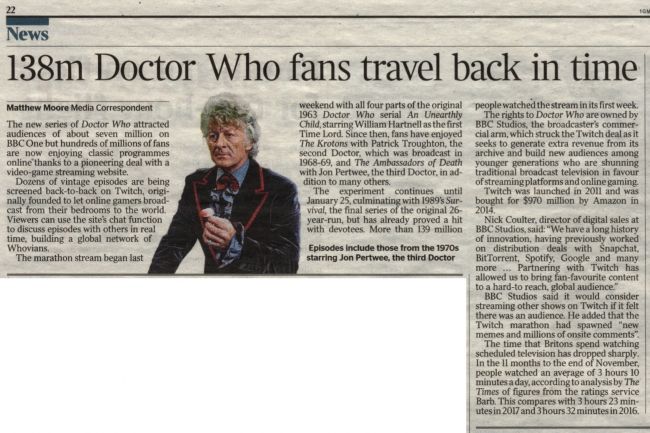 The new series of Doctor Who attracted audiences of about seven million on BBC One but hundreds of millions of fans are now enjoying classic programmes online thanks to a pioneering deal with a video-game streaming website.

Dozens of vintage episodes are being screened back-to-back on Twitch, originally founded to let online garners broadcast from their bedrooms to the world. Viewers can use the site's chat function to discuss episodes with others in real time, building a global network of Whovians.

The marathon stream began last weekend with all four parts of the original 1963 Doctor Who serial An Unearthly Child, starring William Hartnell as the first Time Lord. Since then, fans have enjoyed The Krotons with Patrick Troughton, the second Doctor, which was broadcast in 1968-69, and The Ambassadors of Death with Jon Pertwee, the third Doctor, in addition to many others.

The experiment continues until January 25, culminating with 1989's Survival, the final series of the original 26-year-run, but has already proved a hit with devotees. More than 139 million people watched the stream in its first week.

The rights to Doctor Who are owned by BBC Studios, the broadcaster's commercial arm, which struck the Twitch deal as it seeks to generate extra revenue from its archive and build new audiences among younger generations who are shunning traditional broadcast television in favour of streaming platforms and online gaming.

Nick Coulter, director of digital sales at BBC Studios, said: "We have a long history of innovation, having previously worked on distribution deals with Snapchat, BitTorrent, Spotify, Google and many more ... Partnering with Twitch has allowed us to bring fan-favourite content to a hard-to reach, global audience."

BBC Studios said it would consider streaming other shows on Twitch if it felt there was an audience. He added that the Twitch marathon had spawned "new memes and millions of onsite comments".

The time that Britons spend watching scheduled television has dropped sharply. In the 11 months to the end of November, people watched an average of 3 hours 10 minutes a day, according to analysis by The Times of figures from the ratings service Barb. This compares with 3 hours 23 minutes in 2017 and 3 hours 32 minutes in 2016.

Caption: Episodes include those from the 1970s starring Jon Pertwee, the third Doctor