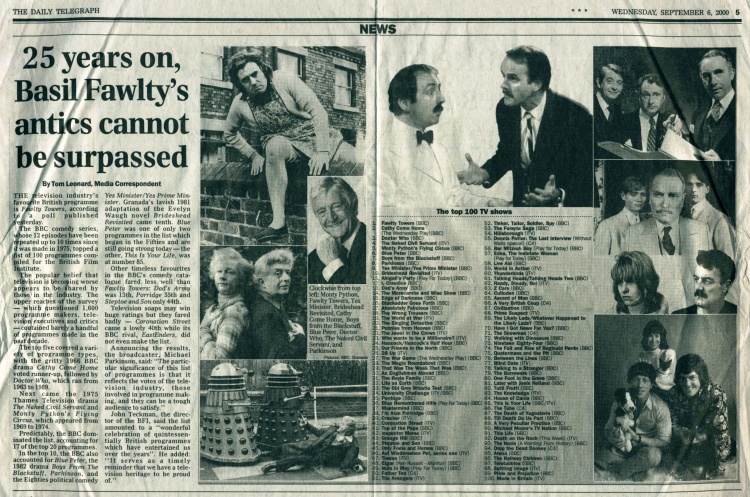 THE television industry's favourite British programme is Fawlty Towers, according to a poll published yesterday.

The BBC comedy series, whose 12 episodes have been repeated up to 10 times since was made in 1975, topped a list of 100 programmes compiled for the British Film Institute.

The popular belief that television is becoming worse appears to be shared by those in the industry. The upper reaches of the survey - which questioned 1,600 programme makers, television executives and critics - contained barely a handful of programmes made in the past decade.

The top five covered a variety of programme types, with the gritty 1966 BBC drama Cathy Come Home voted runner-up, followed by Doctor Who, which ran from 1963 to 1989.

Next came the 1975 Thames Television drama The Naked Civil Servant and Monty Python's Flying Circus, which appeared from 1969 to 1974.

Predictably, the BBC dominated the list, accounting for 17 of the top 20 programmes.

In the top 10, the BBC also accounted for Blue Peter, the 1982 drama Boys From The Blackstuff, Parkinson, and the Eighties political comedy Yes Minister/Yes Prime Minister. Granada's lavish 1981 adaptation of the Evelyn Waugh novel Brideshead Revisited came tenth. Blue Peter was one of only two programmes in the list which began in the Fifties and are still going strong today - the other, This Is Your Life, was at number 85.

Other timeless favourites in the BBC's comedy catalogue fared less well than Fawlty Towers: Dad's Army was 13th, Porridge 35th and Steptoe and Son only 44th.

Television soaps may win huge ratings but they fared badly - Coronation Street came a lowly 40th while its BBC rival, EastEnders, did not even make the list.

Announcing the results, the broadcaster, Michael Parkinson, said: "The particular significance of this list of programmes is that it reflects the votes of the television industry, those involved in programme making, and they can be a tough audience to satisfy."

John Teckman, the director of the BFI, said the list amounted to a "wonderful celebration of quintessentially British programmes which have entertained us over the years". He added: "It serves as a timely reminder that we have a television heritage to be proud of."

7. Boys from the Blackstuff (BBC)

14. The Morecambe and Wise Show (BBC)

74. The Fail and Rise of Reginald Perrin (BBC)