30 Years Of Doctor Who and Its Music 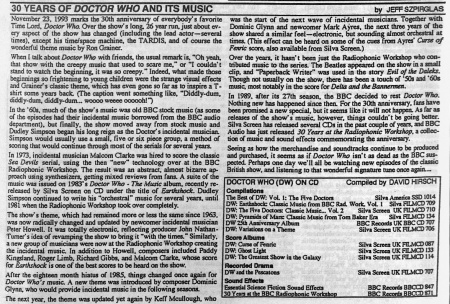 November 23, 1993 marks the 30th anniversary of everybody's favorite Time Lord. Doctor Who. Over the show's long. 26 year run, just about every aspect of the show has changed (including the lead actor—several times), except his time/space machine, the TARDIS, and of course the wonderful theme music by Ron Grainer.

When I talk about Doctor Who with friends, the usual remark is, "Oh yeah. that show with the creepy music that used to scare me," or "I couldn't stand to watch the beginning, it was so creepy." Indeed, what made those beginnings so frightening to young children were the strange visual effects and Grainer's classic theme, which has even gone so far as to inspire a T-shirt some years back. (The caption went something like, "Diddly-dum, diddly-dum, diddly-dum... woooo weeee ooh!")

In the '60s. much of the show's music was old BBC stock music (as some of the episodes had their incidental music borrowed from the BBC audio department), but finally. the show moved away from stock music and Dudley Simpson began his long reign as the Doctor's incidental musician. Simpson would usually use a small, five or six piece group, a method of scoring that would continue through most of the serials for several years.

In 1973, incidental musician Malcom Clarke was hired to score the classic Sea Devi& serial. using the then "new" technology over at the BBC Radiophonic Workshop. The result was an abstract, almost bizarre approach using synthesizers, getting mixed reviews from fans. A suite of the music was issued on 1983's Doctor Who - The Music album. recently re-released by Silva Screen on CD under the title of Earthshock. Dudley Simpson continued to write his "orchestral" music for several years. until 1981 when the Radiophonic Workshop took over completely.

The show's theme, which had remained more or less the same since 1963, was now radically changed and updated by newcomer incidental musician Peter Howell. It was totally electronic, reflecting producer John Nathan-Turner's idea of revamping the show to bring it "with the times." Similarly, a new group of musicians were now at the Radiophonic Workshop creating the incidental music. In addition to Howell, composers included Paddy Kingsland, Roger Limb. Richard Gibbs. and Malcom Clarke, whose score for Earthshock is one of the best scores to be heard on the show.

After the eighteen month hiatus of 1985, things changed once again for Doctor Who's music. A new theme was introduced by composer Dominic Glynn, who would provide incidental music in the following seasons.

The next year, the theme was updated yet again by Keff Mcullough, who was the start of the next wave of incidental musicians. Together with Dominic Glynn and newcomer Mark Ayres, the next three years of the show shared a similar feel—electronic, but sounding almost orchestral at times. (This effect can be heard on some of the cues from Ayres' Curse of Fenric score, also available from Silva Screen.)

Over the years. it hasn't been just the Radiophonic Workshop who contributed music to the series. The Beatles appeared on the show in a small clip, and "Paperback Writer" was used in the story Evil of the Daleks. Though not usually on the show, there has been a touch of '50s and '60s music, most notably in the score for Delta and the Bannermen.

In 1989, after its 27th season, the BBC decided to rest Doctor Who. Nothing new has happened since then. For the 30th anniversary, fans have been promised a new special, but it seems like it will not happen. As far as releases of the show's music. however, things couldn't be going better. Silva Screen has released several CDs in the past couple of years, and BBC Audio has just released 30 Years at the Radiophonic Workshop, a collection of music and sound effects commemorating the anniversary.

Seeing as how the merchandise and soundtracks continue to be produced and purchased, it seems as if Doctor Who isn't as dead as the BBC suspected. Perhaps one day well all be watching new episodes of the classic British show. and listening to that wonderful signature tune once again....

DOCTOR WHO (DW) ON CD Compiled by DAVID HIRSCH

30 Years at the BBC Radiophonic Workshop