A Convention for Dr. Who Fans 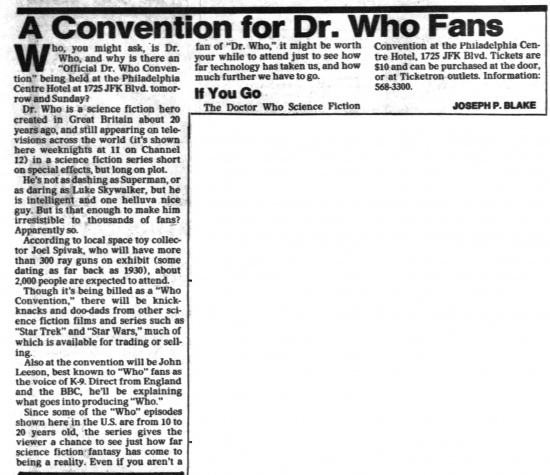 Who, you might ask, is Dr. Who, and why is there an "Official Dr. Who Convention" being held at the Philadelphia Centre Hotel at 1725 JFK Blvd. tomorrow and Sunday?

Dr. Who is a science fiction hero created in Great Britain about 20 years ago, and still appearing on televisions across the world (it's shown here weeknights at 11 on Channel 12) in a science fiction series short on special effects, but long on plot.

He's not as dashing as Superman, or as daring as Luke Skywalker, but he is intelligent and one helluva nice guy. But is that enough to make him irresistible to thousands of fans? Apparently so.

According to local space toy collector Joel Spivak, who will have more than 300 ray guns on exhibit (some dating as far back as 1930), about 2,000 people are expected to attend.

Though it's being billed as a "Who Convention," there will be knickknacks and doo-dads from other science fiction films and series such as "Star Trek" and "Star Wars," much of which is available for trading or selling.

Also at the convention will be John Leeson, best known to "Who" fans as the voice of K-9. Direct from England and the BBC, he'll be explaining what goes into producing "Who."

Since some of the "Who" episodes shown here in the U.S. are from 10 to 20 years old, the series gives the viewer a chance to see just how far science fiction fantasy has come to being a reality. Even if you aren't a fan of "Dr. Who," it might be worth your while to attend just to see how far technology has taken us, and how much further we have to go.

The Doctor Who Science Fiction Convention at the Philadelphia Centre Hotel, 1725 JFK Blvd. Tickets are $10 and can be purchased at the door, or at Ticketron outlets. Information: 568-3300.