A Doctor Who World, With Sex in It 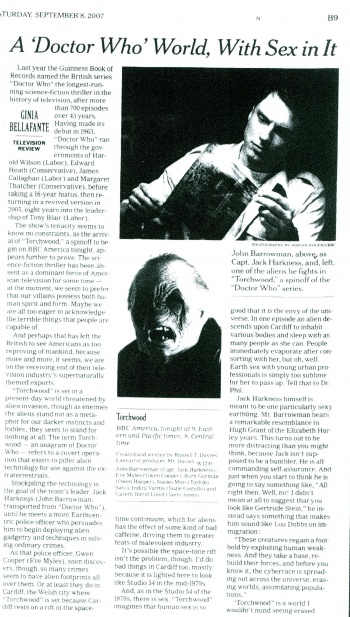 Last year the Guinness Book of Records named the British series "Doctor Who" the longest-running science-fiction thriller in the history of television, after more than 700 episodes over 43 years. Having made its debut in 1963, "Doctor Who" ran through the governments of Harold Wilson (Labor), Edward Heath (Conservative), James Callaghan (Labor) and Margaret Thatcher (Conservative), before taking a 16-year hiatus, then returning in a revived version in 2005, eight years into the leadership of Tony Blair (Labor).

The show's tenacity seems to know no constraints, as the arrival of "Torchwood," a spinoff to begin on BBC America tonight, appears further to prove. The science-fiction thriller has been absent as a dominant force of American television for some time -- at the moment, we seem to prefer that our villains possess both human spirit and form. Maybe we are all too eager to acknowledge the terrible things that people are capable of.

And perhaps that has left the British to see Americans as too reproving of mankind, because more and more, it seems, we are on the receiving end of their television industry's supernaturally themed exports.

"Torchwood" is set in a present-day world threatened by alien invasion, though as enemies the aliens stand not as a metaphor for our darker instincts and foibles; they seem to stand for nothing at all. The term Torchwood -- an anagram of Doctor Who -- refers to a covert operation that exists to pilfer alien technology for use against the extraterrestrials.

Stockpiling the technology is the goal of the team's leader, Jack Harkness (John Barrowman, transported from "Doctor Who"), until he meets a more Earthcentric police officer who persuades him to begin deploying alien gadgetry and techniques in solving ordinary crimes.

As that police officer, Gwen Cooper (Eve Myles), soon discovers, though, so many crimes seem to have alien footprints all over them. Or at least they do in Cardiff, the Welsh city where "Torchwood" is set because Cardiff rests on a rift in the space-time continuum, which for aliens has the effect of some kind of bad caffeine, driving them to greater feats of malevolent industry.

It's possible the space-time rift isn't the problem, though. I'd do bad things in Cardiff too, mostly because it is lighted here to look like Studio 54 in the mid-1970s.

And, as in the Studio 54 of the 1970s, there is sex. "Torchwood" imagines that human sex is so good that it is the envy of the universe. In one episode an alien descends upon Cardiff to inhabit various bodies and sleep with as many people as she can. People immediately evaporate after consorting with her, but oh, well. Earth sex with young urban professionals is simply too sublime for her to pass up. Tell that to Dr. Phil.

Jack Harkness himself is meant to be one particularly sexy earthling. Mr. Barrowman bears a remarkable resemblance to Hugh Grant of the Elizabeth Hurley years. This turns out to be more distracting than you might think, because Jack isn't supposed to be a bumbler. He is all commanding self-assurance. And just when you start to think he is going to say something like, "All right then. Well, no! I didn't mean at all to suggest that you look like Gertrude Stein," he instead says something that makes him sound like Lou Dobbs on immigration:

"These creatures regain a foothold by exploiting human weakness. And they take a base, rebuild their forces, and before you know it, the cyberrace is spreading out across the universe, erasing worlds, assimilating populations."

"Torchwood" is a world I wouldn't mind seeing erased.

GRAPHIC: PHOTOS: John Barrowman, above, as Capt. Jack Harkness, and, left, one of the aliens he fights in "Torchwood," a spinoff of the "Doctor Who" series. (PHOTOGRAPHS BY ADRIAN ROGERS/BBC)