A Doctor Who house call is just what you need 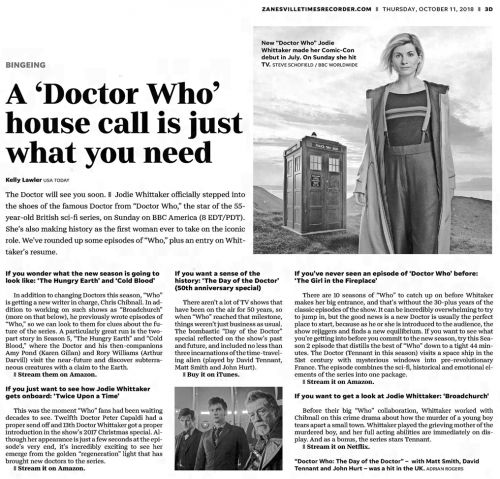 The Doctor will see you soon. Jodie Whittaker officially stepped into the shoes of the famous Doctor from "Doctor Who," the star of the 55-year-old British sci-fi series, on Sunday on BBC America (8 EDT/PDT). She's also making history as the first woman ever to take on the iconic role. We've rounded up some episodes of "Who," plus an entry on Whittaker's resume.

If you wonder what the new season is going to look like: The Hungry Earth' and 'Cold Blood'

In addition to changing Doctors this season, "Who" is getting a new writer in charge, Chris Chibnall. In addition to working on such shows as "Broadchurch" (more on that below), he previously wrote episodes of "Who," so we can look to them for clues about the future of the series. A particularly great run is the two-part story in Season 5, "The Hungry Earth" and "Cold Blood," where the Doctor and his then-companions Amy Pond (Karen Gillan) and Rory Williams (Arthur Darvill) visit the near-future and discover subterraneous creatures with a claim to the Earth.

Stream them on Amazon.

If you just want to see how Jodie Whittaker gets onboard: 'Twice Upon a Time'

This was the moment "Who" fans had been waiting decades to see. Twelfth Doctor Peter Capaldi had a proper send off and 13th Doctor Whittaker got a proper introduction in the show's 2017 Christmas special. Although her appearance is just a few seconds at the episodes very end, it's incredibly exciting to see her emerge from the golden "regeneration" light that has brought new doctors to the series.

Stream it on Amazon.

If you want a sense of the history: The Day of the Doctor' (50th anniversary special)

There aren't a lot of TV shows that have been on the air for 50 years, so when "Who" reached that milestone, things weren't just business as usual. The bombastic "Day of the Doctor" special reflected on the show's past and future, and included no less than three incarnations of the time-traveling alien (played by David Tennant, Matt Smith and John Hurt).

Buy it on iTunes.

If you've never seen an episode of 'Doctor Who' before: 'The Girl in the Fireplace'

There are 10 seasons of "Who" to catch up on before Whitaker makes her big entrance, and that's without the 30-plus years of the classic episodes of the show. It can be incredibly overwhelming to try to jump in, but the good news is a new Doctor is usually the perfect place to start, because as he or she is introduced to the audience, the show rejiggers and finds a new equilibrium. If you want to see what you're getting into before you commit to the new season, try this Season 2 episode that distills the best of "Who" down to a tight 44 minutes. The Doctor (Tennant in this season) visits a space ship in the 51st century with mysterious windows into pre-revolutionary France. The episode combines the sci-fi, historical and emotional elements of the series into one package.

Stream it on Amazon.

If you want to get a look at Jodie Whittaker: 'Broadchurch'

Before their big "Who" collaboration, Whittaker worked with Chibnall on this crime drama about how the murder of a young boy tears apart a small town. Whittaker played the grieving mother of the murdered boy, and her full acting abilities are immediately on display. And as a bonus, the series stars Tennant.

Stream it on Netflix.

Caption: New "Doctor Who Jodie Whittaker made her Comic-Con debut in July. On Sunday she hit TV.

"Doctor Who: The Day of the Doctor" - with Matt Smith, David Tennant and John Hurt - was a hit in the UK.