A Life in the Day: Jodie Whittaker 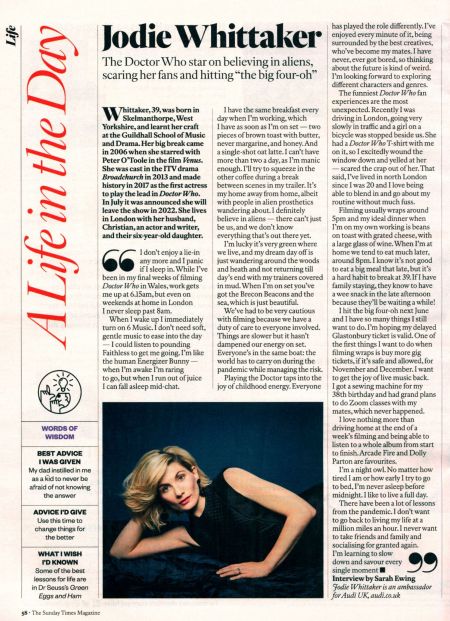 The Doctor Who star on believing in aliens, scaring her fans and hitting "the big four-oh"

Whittaker, 39, was born in Skelmanthorpe, West Yorkshire, and learnt her craft at the Guildhall School of Music and Drama. Her big break came in 2006 when she starred with Peter O'Toole in the film Venus. She was cast in the ITV drama Broadchurch in 2013 and made history in 2017 as the first actress to play the lead in Doctor Who. In July it was announced she will leave the show in 2022. She lives in London with her husband, Christian, an actor and writer, and their six-year-old daughter.

I don't enjoy a lie-in any more and I panic if I sleep in. While I've been in my final weeks of filming Doctor Who in Wales, work gets me up at 6.15am, but even on weekends at home in London I never sleep past 8am.

When I wake up I immediately turn on 6 Music. I don't need soft, gentle music to ease into the day — I could listen to pounding Faithless to get me going. I'm like the human Energizer Bunny —when I'm awake I'm raring to go, but when I run out of juice I can fall asleep mid-chat.

I have the same breakfast every day when I'm working, which I have as soon as I'm on set — two pieces of brown toast with butter, never margarine, and honey. And a single-shot oat latte. I can't have more than two a day, as I'm manic enough. I'll try to squeeze in the other coffee during a break between scenes in my trailer. It's my home away from home, albeit with people in alien prosthetics wandering about. I definitely believe in aliens — there can't just be us, and we don't know everything that's out there yet.

I'm lucky it's very green where we live, and my dream day off is just wandering around the woods and heath and not returning till day's end with my trainers covered in mud. When I'm on set you've got the Brecon Beacons and the sea, which is just beautiful.

We've had to be very cautious with filming because we have a duty of care to everyone involved. Things are slower but it hasn't dampened our energy on set. Everyone's in the same boat: the world has to carry on during the pandemic while managing the risk.

Playing the Doctor taps into the joy of childhood energy. Everyone has played the role differently. I've enjoyed every minute of it, being surrounded by the best creatives, who've become my mates. I have never, ever got bored, so thinking about the future is kind of weird. I'm looking forward to exploring different characters and genres.

The funniest Doctor Who fan experiences are the most unexpected. Recently I was driving in London, going very slowly in traffic and a girl on a bicycle was stopped beside us. She had a Doctor Who T-shirt with me on it, so I excitedly wound the window down and yelled at her — scared the crap out of her. That said, I've lived in north London since I was 20 and I love being able to blend in and go about my routine without much fuss.

Filming usually wraps around 5pm and my ideal dinner when I'm on my own working is beans on toast with grated cheese, with a large glass of wine. When I'm at home we tend to eat much later, around 8pm. I know it's not good to eat a big meal that late, but it's a hard habit to break at 39. If I have family staying, they know to have a wee snack in the late afternoon because they'll be waiting a while!

I hit the big four-oh next June and I have so many things I still want to do. I'm hoping my delayed Glastonbury ticket is valid. One of the first things I want to do when filming wraps is buy more gig tickets, if it's safe and allowed, for November and December. I want to get the joy of live music back. I got a sewing machine for my 38th birthday and had grand plans to do Zoom classes with my mates, which never happened.

I love nothing more than driving home at the end of a week's filming and being able to listen to a whole album from start to finish. Arcade Fire and Dolly Parton are favourites.

I'm a night owl. No matter how tired I am or how early I try to go to bed, I'm never asleep before midnight. I like to live a full day.

There have been a lot of lessons from the pandemic. I don't want to go back to living my life at a million miles an hour. I never want to take friends and family and socialising for granted again. I'm learning to slow down and savour every single moment.

BEST ADVICE I WAS GIVEN

Use this time to change things for the better

WHAT I WISH I'D KNOWN