A different sort of hero 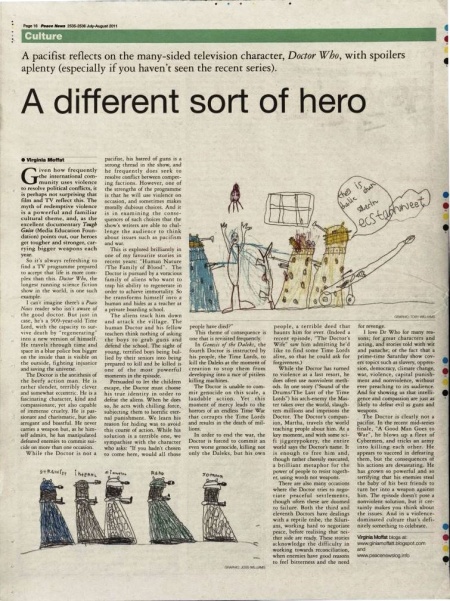 A pacifist reflects on the many-sided television character, Doctor Who, with spoilers aplenty (especially if you haven't seen the recent series).

Given how frequently the international community uses violence to resolve political conflicts, it is perhaps not surprising that film and TV reflect this. The myth of redemptive violence is a powerful and familiar cultural theme, and, as the excellent documentary Tough Guise (Media Education Foundation) points out, our heroes get tougher and stronger, carrying bigger weapons each year.

So it's always refreshing to find a TV programme prepared to accept that life is more complex than this. Doctor Who, the longest running science fiction show in the world, is one such example.

I can't imagine there's a Peace News reader who isn't aware of the good doctor. But just in case, he's a 909-year-old Time Lord, with the capacity to survive death by "regenerating" into a new version of himself. He travels through time and space in a blue police box bigger on the inside than is visible on the outside, fighting injustice and saving the universe.

The Doctor is the antithesis of the beefy action man. He is rather slender, terribly clever and somewhat eccentric. He is a fascinating character, kind and compassionate, yet also capable of immense cruelty. He is passionate and charismatic, but also arrogant and boastful. He never carries a weapon but, as he himself admits, he has manipulated defeated enemies to commit suicide on more than one occasion.

While the Doctor is not a pacifist, his hatred of guns is a strong thread in the show, and he frequently does seek to resolve conflict between competing factions. However, one of the strengths of the programme is that he will use violence on occasion, and sometimes makes morally dubious choices. And it is in examining the consequences of such choices that the show's writers are able to challenge the audience to think about issues such as pacifism and war.

This is explored brilliantly in one of my favourite stories in recent years: "Human Nature/The Family of Blood". The Doctor is pursued by a voracious family of aliens who want to trap his ability to regenerate in order to achieve immortality. So he transforms himself into a human and hides as a teacher at a private boarding school.

The aliens track him down and attack the village. The human Doctor and his fellow teachers think nothing of asking the boys to grab guns and defend the school. The sight of young, terrified boys being bullied by their seniors into being prepared to kill and be killed is one of the most powerful moments in the episode.

Persuaded to let the children escape, the Doctor must choose his true identity in order to defeat the aliens. When he does so, he acts with chilling force, subjecting them to horrific eternal punishment. We learn his reason for hiding was to avoid this course of action. While his solution is a terrible one, we sympathise with the character who asks: "If you hadn't chosen to come here, would all those people have died?"

This theme of consequence is one that is revisited frequently.

In Genesis of the Daleks, the fourth Doctor is instructed by his people, the Time Lords, to kill the Daleks at the moment of creation to stop them from developing into a race of pitiless killing machines.

The Doctor is unable to commit genocide on this scale, a laudable action. Yet this moment of mercy leads to the horrors of an endless Time War that corrupts the Time Lords and results in the death of millions.

In order to end the war, the Doctor is forced to commit an even worse genocide, killing not only the Daleks, but his own people, a terrible deed that haunts him for ever. (Indeed a recent episode, "The Doctor's Wife" saw him admitting he'd like to find some Time Lords alive, so that he could ask for forgiveness.)

While the Doctor has turned to violence as a last resort, he does often use nonviolent methods. In one story ("Sound of the Drums/The Last of the Time Lords") his arch-enemy the Master takes over the world, slaughters millions and imprisons the Doctor. The Doctor's companion, Martha, travels the world teaching people about him. At a key moment, and with some sci-fi jiggerypokery, the entire world says the Doctor's name. It is enough to free him and, though rather cheesily executed, a brilliant metaphor for the power of people to resist together, using words not weapons.

There are also many occasions where the Doctor tries to negotiate peaceful settlements, though often these are doomed to failure. Both the third and eleventh Doctors have dealings with a reptile tribe, the Siluri-ans, working hard to negotiate peace, before realising that neither side are ready. These stories acknowledge the difficulty in working towards reconciliation, when enemies have good reasons to feel bitterness and the need for revenge.

I love Dr Who for many reasons; for great characters and acting, and stories told with wit and panache; or the fact that a prime-time Saturday show covers topics such as slavery, oppression, democracy, climate change, war, violence, capital punishment and nonviolence, without ever preaching to its audience. And for showing us that intelligence and compassion are just as likely to defeat evil as guns and weapons.

The Doctor is clearly not a pacifist. In the recent mid-series finale, "A Good Man Goes to War", he blows up a fleet of Cybermen, and tricks an army into killing each other. He appears to succeed in defeating them, but the consequences of his actions are devastating. He has grown so powerful and so terrifying that his enemies steal the baby of his best friends to turn her into a weapon against him. The episode doesn't pose a nonviolent solution, but it certainly makes you think about the issues. And in a violence-dominated culture that's definitely something to celebrate.