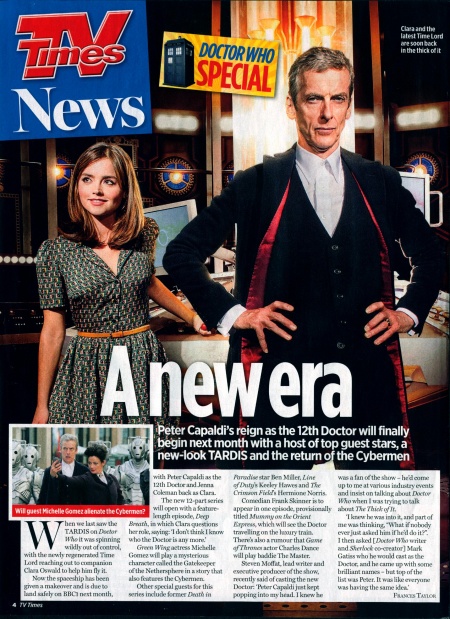 Peter Capaldi's reign as the 12th Doctor will finally begin next month with a host of top guest stars, a new-look TARDIS and the return of the Cybermen

When we last saw the TARDIS on Doctor Who it was spinning wildly out of control, with the newly regenerated Time Lord reaching out to companion Clara Oswald to help him fly it.

Now the spaceship has been given a makeover and is due to land safely on BBC1 next month, with Peter Capaldi as the 12th Doctor and Jenna Coleman back as Clara.

The new 12-part series will open with a feature-length episode, Deep Breath, in which Clara questions her role, saying: 'I don't think I know who the Doctor is any more.'

Green Wing actress Michelle Gomez will play a mysterious character called the Gatekeeper of the Nethersphere in a story that also features the Cybermen.

Other special guests for this series include former Death in Paradise star Ben Miller, Line of Duty's Keeley Hawes and The Crimson Field's Hermione Norris.

Comedian Frank Skinner is to appear in one episode, provisionally titled Mummy on the Orient Express, which will see the Doctor travelling on the luxury train. There's also a rumour that Game of Thrones actor Charles Dance will play baddie The Master.

Steven Moffat, lead writer and executive producer of the show, recently said of casting the new Doctor: 'Peter Capaldi just kept popping into my head. I knew he was a fan of the show - he'd come up to me at various industry events and insist on talking about Doctor Who when I was trying to talk about The Thick of It.

'I knew he was into it, and part of me was thinking, "What if nobody ever just asked him if he'd do it?". I then asked [Doctor Who writer and Sherlock co-creator] Mark Gatiss who he would cast as the Doctor, and he came up with some brilliant names - but top of the list was Peter. It was like everyone• was having the same idea.'

Caption: Clara and the latest Time Lord are soon back in the thick of it