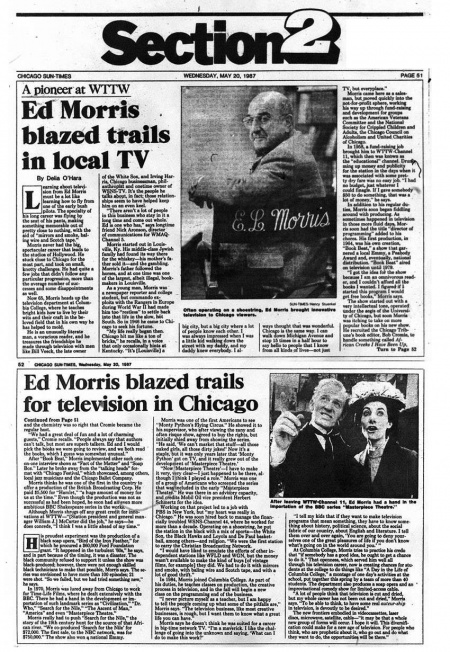 Learning about television from Ed Morris must be a lot like learning how to fly from one of the early bush pilots. The specialty of his long career was flying by the seat of his pants, making something memorable out of pretty close to nothing, with the aid of "mirrors and smoke, baling wire and Scotch tape."

Morris never had the big, spectacular career that leads to the studios of Hollywood. He stuck close to Chicago for the most part, and took on small, knotty challenges. He had quite a few jobs that didn't follow any particular progression, more than the average number of successes and some disappointments as well.

Now 65, Morris heads up the television department at Columbia College, where he teaches bright kids how to live by their wits and their craft in the beloved field that in his own way he has helped to mold.

He is an unusually literate man, a voracious reader, and he treasures the friendships he made through television with men like Bill Veeck, the late owner of the White Sox, and Irving Harris, Chicago businessman, philanthropist and onetime owner of WSNS-TV. It's the people he talks about, in fact; those relationships seem to have helped keep him on an even keel.

"There aren't a lot of people in this business who stay in it a long time and come out whole. Ed is one who has," says longtime friend Nick Aronson, director of communications for WMAQ-Channel 5.

Morris started out in Louisville, Ky. His middle-class Jewish family had found its way there for the whiskey - his mother's father sold it - and the gambling. Morris's father followed the horses, and at one time was one of the largest, albeit illegal, bookmakers in Louisville.

As a young man, Morris was a newspaper reporter and college student, but commando exploits with the Rangers in Europe during World War II had made him too "restless" to settle back into that life in the slow, hot South. So in 1946 he came to Chicago to seek his fortune.

"My life really began then. Chicago hit me like a ton of bricks," he recalls, in a voice that only occasionally hints at Kentucky. "It's (Louisville) a big city, but a big city where a lot of people know each other. I was always impressed when I was a little kid walking down the street with my daddy, and my daddy knew everybody. I always thought that was wonderful. Chicago is the same way. I can walk down Michigan Avenue and stop 15 times in a half hour to say hello to people that I know from all kinds of lives - not just TV, but everyplace."

Morris came here as a salesman, but moved quickly into the not-for-profit sphere, working his way up through fund-raising and development for groups such as the American Veterans Committee and the National Society for Crippled Children and Adults, the Chicago Council on Alcoholism and United Charities of Chicago.

In 1958, a fund-raising job brought him to WTTW-Channel 11, which then was known as the "educational" channel. Drumming up money and publicity for the station in the days when it was associated with some pretty dry fare was no easy job. "I had no budget, just whatever I could finagle. If I gave somebody $50 to do something, that was a lot of money," he says.

In addition to his regular duties, Morris soon began fiddling around with producing. As sometimes happened in television in those more fluid days, Morris soon had the title "director of programming" added to his chores. His first production, in 1964, was his own creation, "Book Beat," a show that garnered a local Emmy, a Peabody Award and, eventually, national distribution. "Book Beat" aired on television until 1979.

"I got the idea for the show because I am an omnivorous reader, and I couldn't afford all the books I wanted. I figured if I started this program I would get free books," Morris says.

The show started out with a very intellectual tone, operated under the aegis of the University of Chicago, but soon Morris was itching to take on more popular books on his new show. He recruited the Chicago Tribune's book editor, Bob Cromie, to handle something called African Creeks I Have Been Up, and the chemistry was so right that Cromie became the regular host.

"We had a great deal of fun and a lot of charming guests," Cromie recalls. "People always say that authors can't talk, but most are superb talkers. Ed and I would pick the books we were going to review, and we both read the books, which I guess was somewhat unusual."

After "Book Beat," Morris implemented other such one-on-one interview shows as "Fact of the Matter" and "Soap Box." Later he broke away from the "talking heads" format with "Chicago Festival," which showcased, among others, local jazz musicians and the Chicago Ballet Company.

Morris thinks he was one of the first in the country to offer a production of the British Broadcasting Corp. He paid $5,500 for "Hamlet," "a huge amount of money for us at the time." Even though the production was not as successful as had been hoped, he soon had an even more ambitious BBC Shakespeare series in the works.

Although Morris shrugs off any great credit for innovations at WTTW - "(Station president and general manager William J.) McCarter did the job," he says - he does concede, "I think I was a little ahead of my time."

His proudest experiment was the production of a black soap opera, "Bird of the Iron Feather," for which he procured a $60,000 Ford Foundation grant. "It happened in the turbulent '60s," he says, and in part because of the timing, it was a disaster. The black community refused to support it unless the show was black-produced; however, there were not enough skilled black technicians to make that possible, Morris says. The series was envisioned to have more than 100 episodes; 21 were shot. "So we failed, but we had tried something new," he says.

In 1970, Morris was lured away from Chicago to work for Time-Life Films, where he dealt extensively with the BBC. There he had a hand in the development or importation of such landmark series as "Civilization," "Dr. Who," "Search for the Nile," "The Ascent of Man," "America" and even "Masterpiece Theatre."

Morris really had to push "Search for the Nile," the story of the 19th century hunt for the source of that African river. "We co-produced `Search for the Nile' for $72,000. The first sale, to the NBC network, was for $750,000." The show also won a national Emmy.

Morris was one of the first Americans to see "Monty Python's Flying Circus." He showed it to his supervisor, who after viewing the zany and often risque show, agreed to buy the rights, but initially shied away from showing the series. "He said, `We can't market that stuff - all those naked girls, all those dirty jokes!' Now it's a staple, but it was only years later that `Monty Python' got on TV, and it really grew out of the development of `Masterpiece Theatre.'

"Now `Masterpiece Theatre' - I have to make it very, very clear - I just happened to be there, although I think I played a role." Morris was one of a group of Americans who screened the series that was included in the early "Masterpiece Theatre." He was there in an advisory capacity, and credits Mobil Oil vice president Herbert Schmertz for the idea.

Working on that project led to a job with PBS in New York, but "my heart was really in Chicago." He was soon hired back to manage the financially troubled WSNS-Channel 44, where he worked for more than a decade. Operating on a shoestring, he put the station in the black with a mix of sports - the White Sox, the Black Hawks and Loyola and De Paul basketball, among others - and religion. "We were the first station to carry the Christian Broadcasting Network.

"I would have liked to emulate the efforts of other independent stations like WFLD and WGN, but the money wasn't available to make the kind of buys (of vintage films, for example) they did. We had to do it with mirrors and smoke, with baling wire and Scotch tape, and with a lot of good thrift."

In 1984, Morris joined Columbia College. As part of his duties, he teaches classes on production, the creative process in television, and in the fall will begin a new class on the programming end of the business.

"I never picture myself as a teacher, but I am happy to tell the people coming up what some of the pitfalls are," Morris says. "The television business, like most creative businesses, is rough, but I want them to know what a great life you can have."

Morris says he doesn't think he was suited for a career in big-time network TV. "I'm a maverick. I like the challenge of going into the unknown and saying, `What can I do to make this work?'

"I tell my kids that if they want to make television programs that mean something, they have to know something about history, political science, about the social fabric of our country, about English and literature. I tell them over and over again, `You are going to deny yourselves one of the great pleasures of life if you don't know what's going on in the world around you.' "

At Columbia College, Morris tries to practice his credo that "if somebody has a good idea, he ought to get a chance to do it." That openness, which served him well all through his television career, now is creating chances for students at the college to do things like "A Day in the Life of Columbia College," a montage of one day's activities at the school, put together this spring by a team of more than 40 students. The department also produces a soap opera and an improvisational comedy show for limited-access cable.

"A lot of people think that television is cut and dried, but my whole career has not been cut and dried," Morris says. "To be able to think, to have some real auteur-ship in television, is devoutly to be desired."

The new frontiers embodied in videocassettes, laser discs, microwave, satellite, cable - "it may be that a whole new group of forms will occur. I hope it will. This diversification could make for a new age of television. For people who think, who are prophetic about it, who go out and do what they want to do, the opportunities will be there."

Caption: After leaving WTTW-Channel 11, Ed Morris had a hand in the importation of the BBC series "Masterpiece Theatre." Often operating on a shoestring, Ed Morris brought innovative television to Chicago viewers.Credit: Nancy Stuenkel