A powerful influence in the lives of children 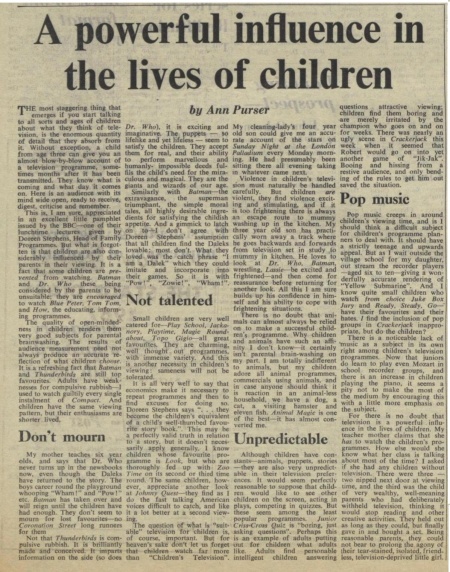 THE most staggering thing that emerges if you start talking to all sorts and ages of children about what they think of television. is the enormous quantity of detail that they absorb from it. Without exception, a child from age three can give you an almost blow-by-blow account of a television programme, sometimes months after it has been transmitted. They know what is coming and what day it comes on. Here is an audience with its mind wide open, ready to receive, digest, criticise and remember.

This is, I am sure, appreciated in an excellent little pamphlet issued by the BBC—one of their lunchtime lectures given by Doreen Stephens, Head of Family Programmes. But what is forgot. ten is that children are also considerably influenced by their parents in their viewing. It is a fact that some children are prevented from watching. Batman and Dr. Who these being considered by the parents to be unsuitable: they are encouraged to watch Blue Peter, Tom Tom, and How, the educating, informing programmes.

The quality of open-mindedness in children renders them very good subjects for parental brainwashing. The results of audience measurement need not always produce an accurate reflection of what children choose. It is a refreshing fact that Batman and Thunderbirds are still top favourites. Adults have weaknesses for compulsive rubbish—I used to watch guiltily every single instalment of Compact. And children have the same viewing pattern. but their enthusiasms are shorter lived.

My mother teaches six year olds. and says that Dr. Who never turns up in the newsbooks now, even though the Daleks have returned to the story. The boys career round the playground whooping "Wham!" and "Pow!" etc. Batman has taken over and will reign until the children have had enough. They don't seem to mourn for lost favourites—no Coronation Street long runners for them

Not that Thunderbirds is compulsive rubbish. It is brilliantly made and conceived. It imparts information on the side (so does Dr. Who), it is exciting and imaginative. The puppets — so lifelike and yet lifeless — seem to satisfy the children. They accept them for real, and their ability to perform marvellous and humanly impossible deeds fulfils the child's need for the miraculous and magical. They are the giants and wizards of our age.

Similarly with Batman—the extravagance, the superman triumphant, the simple moral tales, all highly desirable ingredients for satisfying the childish appetite. And a gimmick to latch on to—I don't agree with Doreen Stephens assumption that all children find the Daleks lovable: most don't. What they loved was the catch phrase "I am a Dalek" which they could imitate and incorporate into their games. So it is with "Pow!", "Zowie!", "Wham!".

Small children are very well catered for—Play School, Jackanory, Playtime, Magic Roundabout, Topo Gigio—all great favourites. They are charming, well thought out programmes, with immense variety. And this is another necessity in children's viewing: sameness will not be tolerated.

It is all very well to say that economics make it necessary to repeat programmes and then to find excuses for doing so. Doreen Stephens says "... they become the children's equivalent of a child's well-thumbed favourite story book.". This may be a perfectly valid truth in relation to a story, but it doesn't necessarily apply generally. I know children whose favourite programme is Look, but who are thoroughly fed up with Zoo Time on its second or third time round. The same children, however, appreciate another look at Johnny Quest—they find as I do the fast talking American voices difficult to catch, and like it a lot better at a second viewing.

The question of what is "suitable" television for children is, of course, important. But for heaven's sake don't let us forget that children watch far more than "Children's Television". My cleaning-lady's four year old son could give me an accurate account of the stars on Sunday Night at the London Palladium every Monday morning. He had presumably been sitting there all evening taking in whatever came next.

Violence in children's television must naturally be handled carefully. But children are violent, they find violence exciting and stimulating, and if it is too frightening there is always an escape route to mummy washing up in the kitchen. My three year old son has practically worn away a track where he goes backwards and forwards from television set in study to mummy in kitchen. He loves to look at Dr. Who, Batman. wrestling, Lassie—be excited and frightened—and then come for reassurance before returning for another look. All this I am sure builds up his confidence in himself and his ability to cope with frightening situations.

There is no doubt that animals can almost always be relied on to make a successful children's programme. Why children and animals have such an affinity I don't know—it certainly isn't parental brain-washing on my part. I am totally indifferent to animals, but my children adore all animal programmes, commercials using animals, and in case anyone should think it is reaction in an animal-less household, we have a dog, a cat, a visiting hamster and eleven fish. Animal Magic is one of the best—it has almost converted me.

Although children have constants—animals, puppets, stories —they are also very unpredictable in their television preferences. it would seem perfectly reasonable to suppose that children would like to see other children on the screen, acting in plays, competing in quizzes. But these seem among the least popular programmes. Junior Criss-Cross Quiz is "boring, just asking questions". Perhaps this is an example of adults putting out for children what adults like. Adults find personable intelligent children answering questions attractive viewing: children find them boring and are merely irritated by the champion who goes on and on for weeks. There was nearly an ugly scene in Crackerjack this week when it seemed that Robert would go on into yet another game of "Jik-Jak". Booing and hissing from a restive audience, and only bending of the rules to get him out saved the situation.

Pop music creeps in around children's viewing time, and is I should think a difficult subject for children's programme planners to deal with. It should have a strictly teenage and upwards appeal. But as I wait outside the village school for my daughter, out stream the recorder players —aged six to ten—giving a wonderfully accurate rendering of "Yellow Submarine". And I know quite small children who watch from choice Juke Box Jury and Ready. Steady, Go-have their favourites and their hates. 1 find the inclusion of pop groups in Crackerjack inappropriate, but do the children?

There is a noticeable lack of 'music as a subject in its own right among children's television programmes. Now that juniors do learn to play even Mozart in school recorder groups, and there is an increase in children playing the piano, it seems a pity not to make the most of the medium by encouraging this with a little more emphasis on the subject.

For there is no doubt that television is a powerful influence in the lives of children. My teacher mother claims that she has to watch the children's programmes. How else would she know what her class is talking about most of the time? I asked if she had any children without television. There were three —two nipped next door at viewing time, and the third was the child of very wealthy, well-meaning parents who had deliberately withheld television, thinking it would stop reading and other creative activities. They held out as long as they could, but finally gave in and bought a set. Being reasonable parents, they could not bear to prolong the agony of their tear-stained, isolated, friend. less, television-deprived little girl.