A white director asked her in rehearsal: 'How does one pick cotton?' 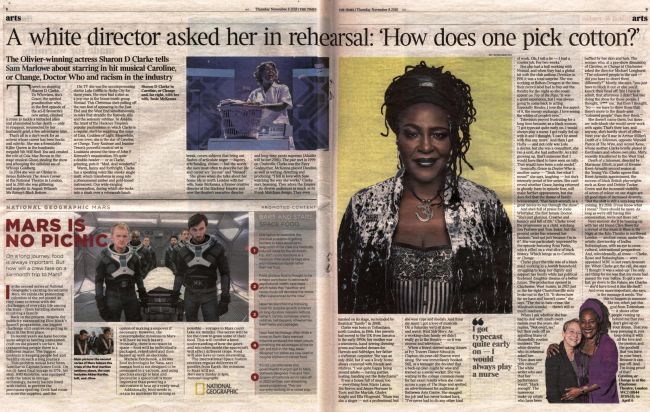 The Olivier-winning actress Sharon D Clarke tells Sam Marlowe about starring in hit musical Caroline, or Change, Doctor Who and racism in the industry

There's no stopping Sharon D Clarke. To Whovians, she's Grace, the spirited grandmother who, in the first episode of the sci-fi favourite's new series, climbed a crane to tackle a tentacled alien and plummeted to her death — only to reappear, resurrected by her husband's grief, a few adventures later.

That's all in a day's work for an actress whose career has been hectic and eclectic. She was a formidable Killer Queen in the bombastic megahit We Will Rock You and created the role of Oda Mae Brown in the stage musical Ghost, stealing the show and whooping the celluloid ass of Whoopi Goldberg.

In 2014 she won an Olivier in James Baldwin's The Amen Corner at the National Theatre in London, and in 2016 she was glittering and majestic in August Wilson's Ma Rainey's Black Bottom.

On TV she was the uncompromising doctor Lola Griffin in Holby City for three years. She even had a stint as a pop star in the house music group Nomad. This Christmas she's pulling off the rare feat of appearing in the East End and the West End simultaneously, in roles that straddle the festively silly and the seriously sublime. In Aladdin, the latest of the Hackney Empire's popular pantomimes in which Clarke is a regular, she'll be supplying the voice of Gaia, Goddess of Light. Meanwhile, across town, she is the star of Caroline, or Change, Tony Kushner and Jeanine Tesori's powerful musical set in Louisiana around the time of John F Kennedy's assassination. It's quite a double-header — or as Clarke, grinning, puts it "Mad. And wonderful."

Warm, funny and forthright, Clarke has a speaking voice like smoky single malt, which transforms in song into a phenomenal amber and gold-toned instrument. Our wide-ranging conversation, during which she tucks into a steak over a rehearsals lunch break, covers subjects that bring out flashes of articulate anger — bigotry, arts funding, elitism — but the words she uses most often to describe her life and career are "joyous" and "blessed".

She glows when she talks about her home life in north London with her wife, Susie McKenna, a former creative director at the Hackney Empire and now the theatre's executive director and long-time panto supremo (Aladdin will be her 20th). The pair met in 1999 on Cinderella; Clarke was the Fairy Godmother, McKenna played Dandini, as well as writing, directing and producing. "I fell in love with Suse watching the way she works," Clarke says, beaming. They adore the Empire — its diverse audiences as much as its Frank Matcham design. They even married on its stage, surrounded by theatrical "family", in 2008.

Clarke was born in Tottenham, north London, in 1966. Her parents had moved to the UK from Jamaica in the early 1950s; her mother was a seamstress, hand-sewing dressing gowns and beaded dresses for Harrods and Selfridges, her father a craftsman carpenter. She was an only child, but it was a lively home, always crammed with friends and relatives. "I was quite happy being around adults — having parties, hosting, handing out the Babychams."

It was a house full of music too — everything from Mario Lanza, Jim Reeves and Jessye Norman to Toots and the Maytals, Gladys Knight and Ella Fitzgerald. "Mum was also a singer — not a professional, but she won cups and medals. And from my mum I got a love of musicals. On a Saturday we'd sit down and watch West Side Story. As a working-class family we didn't really go to the theatre — so it was cinema and television."

When a friend started taking classes at Ivy Travers Dance School in Clapton, six-year-old Sharon went along. She was immediately hooked. Still, as a teenager she decided that a back-up plan might be wise and trained as a social worker. She was waiting in the college common room for her exam results when she came across a copy of The Stage and spotted an advertisement for auditions at Battersea Arts Centre. She snagged the job and has never looked back. "I've never had to do any other kind of work. Oh, I tell a lie — I had a courier job. For two weeks."

She also had a ball working with Nomad, and when they had a global hit with the club anthem Devotion in 1991 it was a total surprise. She was working at Bolton Octagon at the time; their record label had to buy out the theatre for the night so she could appear on Top of the Pops. "It was a great experience, but I was always going to come back to acting. Especially theatre. I love the live aspect of it, the energy exchange. 1 love seeing the whites of people's eyes."

Television proved frustrating for a long time because, as a black woman, "I got typecast quite early on. I would always play a nurse. I got really fed up with it and I thought, 'I can't be arsed with this any more: And then I got Holby — and not only was Lola a doctor, but she was a consultant, she ran a unit, she had authority. As a kid growing up, that's someone that 1 would have liked to have seen on telly. That would have been a role model."

Ironically, Grace in Doctor Who is another nurse — "Yeah. See what I mean?" she says, laughing — but she's intensely proud of the series. She can't reveal whether Grace, having returned in ghostly form in episode four, will make further appearances, but she does feel that the theme of family bereavement, "that heart-wrench, is a great device to run through the show".

And she's full of praise for Jodie Whittaker, the first female Doctor. "She's just glorious. Creative and bouncy and full of life." Clarke loved the programme as a child, watching Jon Pertwee and Tom Baker, but the present series has renewed her fandom, "and not just because I'm in it". She was particularly impressed by the episode featuring Rosa Parks, which riffed on a vital slice of black history. Which brings us to Caroline, or Change.

Clarke plays the title role of a black maid working in a Jewish household, struggling to keep her dignity and support her family while her political firebrand daughter dreams of a better future. The production opened in Chichester, West Sussex, in 2017, just as the far-right Charlottesville riots broke out in the US. "It shows how far we have and haven't come," she says. "The rise in hate crime, the Windrush scandal — there's still so much madness!'

When I ask whether she has had to deal with much overt racism over the years, she replies, "Not overt, no," but then reels off an appalling litany of shamefully routine incidents. The white director who in rehearsal asked her: "How does one pick cotton?" The white writer who said that her performance wasn't "black enough". The numerous make-up artists who have been baffled by her skin and hair. The woman who, at a pre-show discussion of Caroline, or Change at Chichester asked the director Michael Longhurst: "The coloured people in the cast — did you have to direct them differently?" Mostly, she says, "you just have to block it out or else you'd knock their head off. But I have to admit, that afternoon I didn't feel like doing the show for those people. I thought, 'F*" 'em! But then I thought, 'No — we have to show them that there's more to the dumb-arse "coloured people than they think'"

She doesn't name them, but there are individuals she would never work with again. That's their loss, and anyway, she's hardly short of offers. Next year shell star in Arthur Miller's Death of a Salesman, opposite Wendell Pierce of The Wire, and Arinze Kene, whose mother Clarke briefly played in EastEnders and whose own play, Misty, recently transferred to the West End.

Death of a Salesman, directed by Marianne Elliott, is part of Kwame Kwei-Armah's second season at the Young Vic. Clarke agrees that Kwei-Armah's appointment, the success of black British playwrights such as Kene and Debbie Tucker Green and the increased visibility of actors of colour on our stages are all good signs of increased diversity. "But the shift is still a very long time coming. It's 2018. D'you know what I mean? There should be more. As long as we're still having this conversation, we're not there yet."

Next summer shell be teaming up with her old friend Clive Rowe for a revival of the musical Blues in the Night at the Kiln Theatre in northwest London — another venue, under the artistic directorship of Indhu Rubasingham, with an eye to cross-cultural, international perspectives. And, coincidentally, all three — Clarke, Rowe and Rubasingham — were appointed MBE in last year's honours list. When Clarke got the call, she says: "I thought it was a wind-up! The only sad thing for me was that my mum had passed the year before. To get a new hat, go down to the Palace, see Charles — shed have loved it like life itself!"

And even more important, she says, is the message it sends. "For this to happen to someone like me, who's just this gal from Tottenham — it shows other people coming up behind me that you don't give up on your dream. That you keep pursuing it, you keep doing it with all the love and the passion and the goodwill that you have in your heart Because it can pay off. And I'm living proof of that."

Caption: Sharon D Clarke in Caroline, or Change and, far right, with her wife, Susie McKenna