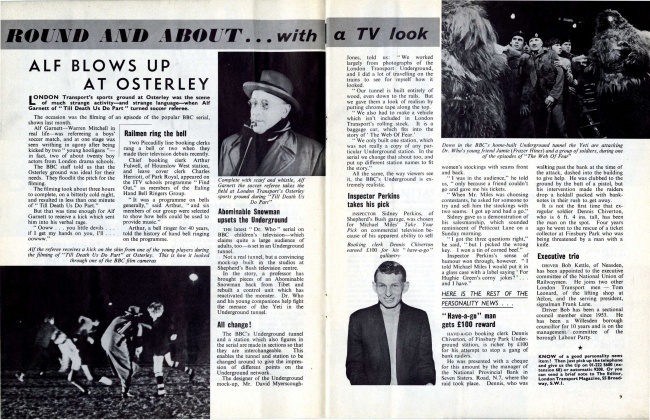 THE latest "Dr. Who" serial on BBC children's television—which claims quite a large audience of adults, too—is set in an Underground tunnel.

Not a real tunnel, but a convincing mock-up built in the studios at Shepherd's Bush television centre.

In the story, a professor has brought pieces of an Abominable Snowman back from Tibet and rebuilt a control unit which has reactivated the monster. Dr. Who and his young companions help fight the menace of the Yeti in the Underground tunnel.

The BBC's Underground tunnel and a station which also figures in the serial are made in sections so that they are interchangeable. This enables the tunnel and station to be changed around to give the impression of different points on the Underground network.

The designer of the Underground mock-up, Mr. David Myerscough-Jones, told us: "We worked largely from photographs of the London Transport Underground, and 1 did a lot of travelling on the trains to see for myself how it looked.

"Our tunnel is built entirely of wood, even down to the rails. But we gave them a look of realism by putting chrome tape along the top.

"We also had to make a vehicle which isn't included in London Transport's rolling stock. It is a baggage car, which fits into the story of 'The Web of Fear.'

"We only built one station, which was not really a copy of any particular Underground station. In the serial we change that about too, and put up different station names to fit the story."

All the same, the way viewers see it, the BBC's Underground is extremely realistic.