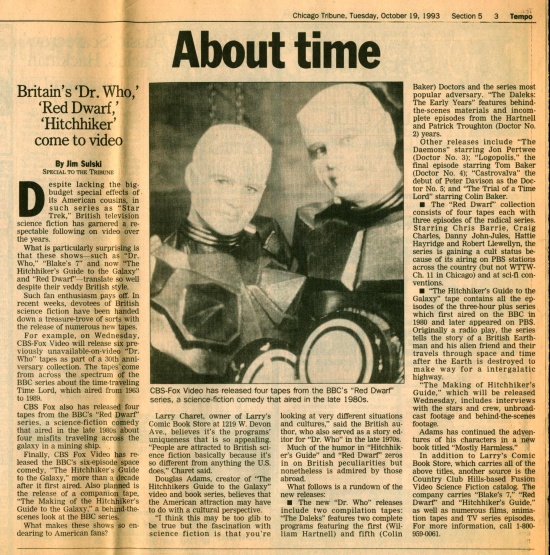 Despite lacking the big-budget special effects of its American cousins, in such series as "Star Trek," British television science fiction has garnered a respectable following on video over the years.

What is particularly surprising is that these shows—such as "Dr. Who," "Blake's 7" and now "The Hitchhiker's Guide to the Galaxy" and "Red Dwarf'—translate so well despite their veddy British style.

Such fan enthusiasm pays off. In recent weeks, devotees of British science fiction have been handed down a treasure-trove of sorts with the release of numerous new tapes.

For example, on Wednesday, CBS-Fox Video will release six previously unavailable-on-video "Dr. Who" tapes as part of a 30th anniversary collection. The tapes come from across the spectrum of the BBC series about the time-traveling Time Lord, which aired from 1963 to 1989.

CBS Fox also has released four tapes from the BBC's "Red Dwarf' series, a science-fiction comedy that aired in the late 1980s about four misfits traveling across the galaxy in a mining ship.

What makes these shows so endearing to American fans?

Larry Charet, owner of Larry's Comic Book Store at 1219 W. Devon Ave., believes it's the programs' uniqueness that is so appealing. "People are attracted to British science fiction basically because it's so different from anything the U.S. does," Charet said.

Douglas Adams, creator of "The Hitchhikers Guide to the Galaxy" video and book series, believes that the American attraction may have to do with a cultural perspective.

"I think this may be too glib to be true but the fascination with science fiction is that you're looking at very different situations and cultures," said the British author, who also served as a story editor for "Dr. Who" in the late 1970s.

Much of the humor in "Hitchhiker's Guide" and "Red Dwarf' zeros in on British peculiarities but nonetheless is admired by those abroad.

What follows is a rundown of the new releases:

• The new "Dr. Who" releases include two compilation tapes: "The Daleks" features two complete programs featuring the first (William Hartnell) and fifth (Colin Baker) Doctors and the series most popular adversary. "The Daleks: The Early Years" features behindthe-scenes materials and incomplete episodes from the Hartnell and Patrick Troughton (Doctor No. 2) years.

Other releases include "The Daemons" starring Jon Pertwee (Doctor No. 3); "Logopolis," the final episode starring Tom Baker (Doctor No. 4); "Castrovalva" the debut of Peter Davison as the Doctor No. 5; and "The Trial of a Time Lord" starring Colin Baker.

• The "Red Dwarf' collection consists of four tapes each with three episodes of the radical series. Starring Chris Barrie, Craig Charles, Danny John-Jules, Hattie Hayridge and Robert Llewellyn, the series is gaining a cult status because of its airing on PBS stations across the country (but not WTTW-Ch. 11 in Chicago) and at sci-fi conventions.

• "The Hitchhiker's Guide to the Galaxy" tape contains all the episodes of the three-hour plus series which first aired on the BBC in 1980 and later appeared on PBS. Originally a radio play, the series tells the story of a British Earthman and his alien friend and their travels through space and time after the Earth is destroyed to make way for a intergalatic highway.

"The Making of Hitchhiker's Guide," which will be released Wednesday, includes interviews with the stars and crew, unbroadcast footage and behind-the-scenes footage.

Adams has continued the adventures of his characters in a new book titled "Mostly Harmless."

In addition to Larry's Comic Book Store, which carries all of the above titles, another source is the Country Club Hills-based Fusion Video Science Fiction catalog. The company carries "Blake's 7," "Red Dwarf' and "Hitchhiker's Guide," as well as numerous films, animation tapes and TV series episodes. For more information, call

Caption: CBS-Fox Video has released four tapes from the BBC's "Red Dwarf" series, a science-fiction comedy that aired in the late 1980s.