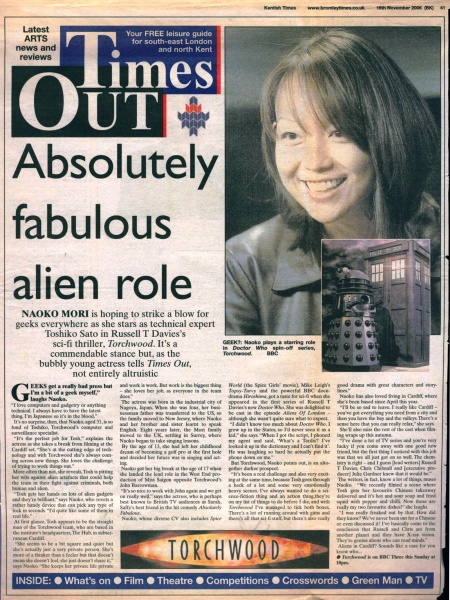 NAOKO MORI is hoping to strike a blow for geeks everywhere as she stars as technical expert Toshiko Sato in Russell T Davies's sci-fi thriller, Torchwood. It's a commendable stance but, as the bubbly young actress tells Times Out, not entirely altruistic

GEEKS get a really bad press but I'm a bit of a geek myself," laughs Naoko. "I love computers and gadgetry or anything technical. I always have to have the latest thing, I'm Japanese so it's in the blood."

It's no surprise, then, that Naoko, aged 31, is so fond of Toshiko, Torchwood's computer and surveillance specialist.

"It's the perfect job for Tosh," explains the actress as she takes a break from filming at the Cardiff set. "She's at the cutting edge of technology and with Torchwood she's always coming across new things. She loves the challenge. of trying to work things out."

More often than not, she reveals, Tosh is pitting her wits against alien artefacts that could help the team in their fight against criminals, both human and alien.

"Tosh gets her hands on lots of alien gadgets and they're brilliant," says Naoko, who covets a rather handy device that can pick any type of lock in seconds. "I'd quite like some of them in real life."

At first glance, Tosh appears to be the straight man of the Torchwood team, who are based in the institute's headquarters, The Hub, in subterranean Cardiff.

"She seems to be a bit square and quiet but she's actually just a very private person. She's more of a thinker than a feeler but that doesn't mean she doesn't feel, she just doesn't share it," says Naoko. "She keeps her private life private and work is work. But work is the biggest thing - she loves her job, as everyone in the team does."

By the age of 13, she had left her childhood dream of becoming a golf pro at the first hole and decided her future was in singing and acting.

Naoko got her big break at the age of 17 when she landed the lead role in the West End production of Miss Saigon opposite Torchwood's John Barrowman.

"It's so nice to work with John again and we get on really well," says the actress, who is perhaps best known to British TV audiences as Sarah, Saffy's best friend in the hit comedy Absolutely Fabulous.

Naoko, whose diverse CV also includes Spice World (the Spice Girls' movie), Mike Leigh's Topsy-Turvy and the powerful BBC docudrama Hiroshima, got a taste for sci-fi when she appeared in the first series of Russell T Davies's new Doctor Who. She was delighted to be cast in the episode Aliens Of London although she wasn't quite sure what to expect. "I didn't know too much about Doctor Who. I grew up in the States, so I'd never seen it as a kid," she says. "When I got the script, I phoned my agent and said, 'What's a Tardis? I've looked it up in the dictionary and I can't find it'. He was laughing so hard he actually put the phone down on me."

But Torchwood, Naoko points out, is an altogether darker prospect.

"It's been a real challenge and also very exciting at the same time, because Tosh goes through a heck of a lot and some very emotionally heavy scenes. I've always wanted to do a science-fiction thing and an action thing, they're on my list of things to do before I die, and with Torchwood I've managed to tick both boxes. There's a lot of running around with guns and there's all that sci-fi stuff, but there's also really good drama with great characters and story-lines."

Naoko has also loved living in Cardiff, where she's been based since April this year. "I'll be so sad to leave. I really like Cardiff you've got everything you need from a city and then you have the bay and the valleys. There's a sense here that you can really relax," she says. She'll also miss the rest of the cast when filming wraps up this autumn.

"I've done a lot of TV series and you're very lucky if you come away with one good new friend, but the first thing I noticed with this job was that we all just got on so well. The chemistry is right - and I guess [lead writers] Russell T Davies, Chris Chibnall and [executive producer] Julie Gardner knew that it would be." The writers, in fact, know a lot of things, muses Naoko. "We recently filmed a scene where Tosh gets her favourite Chinese takeaway delivered and it's hot and sour soup and fried squid with pepper and chilli. Now those are really my two favourite dishes!" she laughs. "I was really freaked out by that. How did they know? We've never been out for a Chinese or even discussed it! I've basically come to the conclusion that Russell and Chris are from another planet and they have X-ray vision. They're genius aliens who can read minds." Aliens in Cardiff? Sounds like a case for you know who...

Torchwood is on BBC Three this Sunday at 10pm.