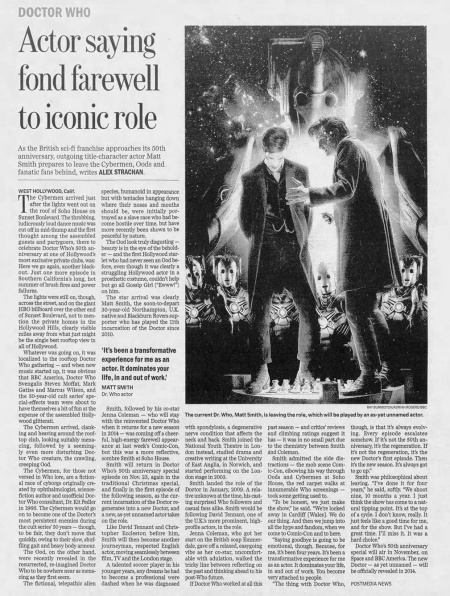 The Cybermen arrived just after the lights went out on the roof of Soho House on Sunset Boulevard. The throbbing, ludicrously loud dance music was cut off in mid-thump and the first thought among the assembled guests and partygoers, there to celebrate Doctor Who's 50th anniversary at one of Hollywood's most exclusive private clubs, was: Here we go again, another blackout. Just one more episode in Southern California's long, hot summer of brush fires and power failures.

The lights were still on, though, across the street, and on the giant HBO billboard over the other end of Sunset Boulevard, not to mention the private homes in the Hollywood Hills, clearly visible miles away from what just might be the single best rooftop view in all of Hollywood.

Whatever was going on, it was localized to the rooftop Doctor Who gathering — and when new music started up, it was obvious that BBC America, Doctor Who Svengalis Steven Moffat, Mark Gatiss and Marcus Wilson, and the 50-year-old cult series' special-effects team were about to have themselves a bit of fun at the expense of the assembled Hollywood glitterati.

The Cybermen arrived, clanking and heaving around the rooftop club, looking suitably menacing, followed by a seemingly even more disturbing Doctor Who creature, the crawling, creeping Ood.

The Cybermen, for those not versed in Who lore, are a fictional race of cyborgs originally created by ophthalmologist, science-fiction author and unofficial Doctor Who consultant, Dr. Kit Pedler in 1966. The Cybermen would go on to become one of the Doctor's most persistent enemies during the cult series' 50 years — though, to be fair, they don't move that quickly, owing to their slow, shuffling gait and heavy body armour.

The Ood, on the other hand, were recently revealed in the resurrected, re-imagined Doctor Who to be nowhere near as menacing as they first seem.

The fictional, telepathic alien species, humanoid in appearance but with tentacles hanging down where their noses and mouths should be, were initially portrayed as a slave race who had become hostile over time, but have more recently been shown to be peaceful by nature.

The Ood look truly disgusting —beauty is in the eye of the beholder — and the first Hollywood starlet who had never seen an Ood before, even though it was clearly a struggling Hollywood actor in a prosthetic costume, couldn't help but go all Gossip Girl ("Ewww!") on him.

The star arrival was clearly Matt Smith, the soon-to-depart 30-year-old Northampton, U.K. native and Blackburn Rovers supporter who has played the 11th incarnation of the Doctor since 2010.

Smith, followed by his co-star Jenna Coleman — who will stay with the reinvented Doctor Who when it returns for a new season in 2014 — was coming off a cheerful, high-energy farewell appearance at last week's Comic-Con, but this was a more reflective, sombre Smith at Soho House.

Smith will return in Doctor Who's 50th anniversary special episode on Nov. 23, again in the traditional Christmas special, and finally in the first episode of the following season, as the current incarnation of the Doctor regenerates into a new Doctor, and a new, as-yet unnamed actor takes on the role.

Like David Tennant and Christopher Eccleston before him, Smith will then become another journeyman, respected English actor, moving seamlessly between film, TV and the London stage.

A talented soccer player in his younger years, any dreams he had to become a professional were dashed when he was diagnosed with spondylosis, a degenerative nerve condition that affects the neck and back. Smith joined the National Youth Theatre in London instead, studied drama and creative writing at the University of East Anglia, in Norwich, and started performing on the London stage in 2003.

Smith landed the role of the Doctor in January, 2009. A relative unknown at the time, his casting surprised Who followers and casual fans alike. Smith would be following David Tennant, one of the U.K.'s more prominent, high-profile actors, in the role.

Jenna Coleman, who got her start on the British soap Emmer-dale, gave off a relaxed, easygoing vibe as her co-star, uncomfortable with adulation, walked the tricky line between reflecting on the past and thinking ahead to his post-Who future.

If Doctor Who worked at all this past season — and critics' reviews and climbing ratings suggest it has — it was in no small part due to the chemistry between Smith and Coleman.

Smith admitted the side distractions — the mob scene Comic-Con, elbowing his way through Oods and Cybermen at Soho House, the red carpet walks at innumerable Who screenings —took some getting used to.

"To be honest, we just make the show," he said. "We're locked away in Cardiff [Wales]. We do our thing. And then we jump into all the hype and fandom, when we come to Comic-Con and to here.

"Saying goodbye is going to be emotional, though. Because, for me, it's been four years. It's been a transformative experience for me as an actor. It dominates your life, in and out of work. You become very attached to people.

Smith was philosophical about leaving. "I've done it for four years," he said, softly. "We shoot nine, 10 months a year. I just think the show has come to a natural tipping point. It's at the top of a cycle. I don't know, really. It just feels like a good time for me, and for the show. But I've had a great time. I'll miss it. It was a hard choice."

Doctor Who's 50th anniversary special will air in November, on Space and BBC America. The new Doctor — as yet unnamed — will be officially revealed in 2014.

Caption: The current Dr. Who, Matt Smith, is leaving the role, which will be played by an as-yet unnamed actor.