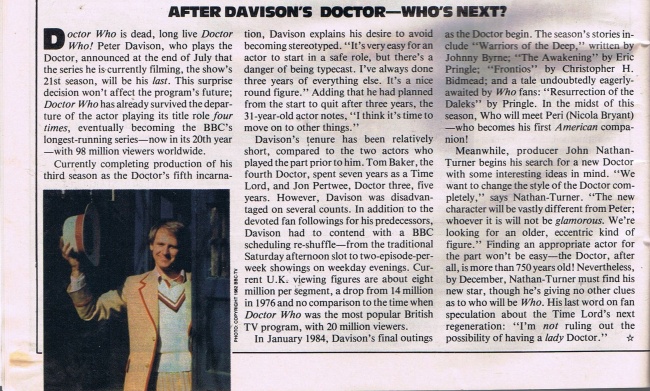 Doctor Who is dead, long live Doctor Who! Peter Davison, who plays the Doctor, announced at the end of July that the series he is currently filming, the show's 21st season, will be his last. This surprise decision won't affect the program's future; Doctor Who has already survived the departure of the actor playing its title role four times, eventually becoming the BBC's longest-running series — now in its 20th year — with 98 million viewers worldwide.

Currently completing production of his third season as the Doctor's fifth incarnation, Davison explains his desire to avoid becoming stereotyped . "It's very easy for an actor to start in a safe role, but there's a danger of being typecast. I've always done three years of everything else. It's a nice round figure." Adding that he had planned from the start to quit after three years, the 31-year-old actor notes, "I think it's time to move on to other things."

Davison's tenure has been relatively short, compared to the two actors who played the part prior to him. Tom Baker, the fourth Doctor, spent seven years as a Time Lord, and Jon Pertwee, Doctor three, five years. However, Davison was disadvantaged on several counts. In addition to the devoted fan followings for his predecessors, Davison had to contend with a BBC scheduling re-shuffle — from the traditional Saturday afternoon slot to two-episode-per-week showings on weekday evenings. Current U.K. viewing figures are about eight million per segment, a drop from 14 million in 1976 and no comparison to the time when Doctor Who was the most popular British TV program, with 20 million viewers.

In January 1984, Davison's final outings as the Doctor begin. The season's stories include "Warriors of the Deep," written by Johnny Byrne; "The Awakening" by Eric Pringle; "Frontios" by Christopher H. Bidmead; and a tale undoubtedly eagerlyawaited by Who fans: "Resurrection of the Daleks" by Pringle. In the midst of this season, Who will meet Peri (Nicola Bryant) — who becomes his first American companion!

Meanwhile, producer John Nathan- Turner begins his search for a new Doctor with some interesting ideas in mind. "We want to change the style of the Doctor completely," says Nathan-Turner. "The new character will be vastly different from Peter; whoever it is will not be glamorous. We're looking for an older, eccentric kind of figure." Finding an appropriate actor for the part won't be easy — the Doctor, after all, is more than 750 years old! Nevertheless, by December, Nathan-Turner must find his new star, though he's giving no other clues as to who will be Who. His last word on fan speculation about the Time Lord's next regeneration: "I'm not ruling out the possibility of having a lady Doctor."