After Pertwee, who's next for Dr Who? 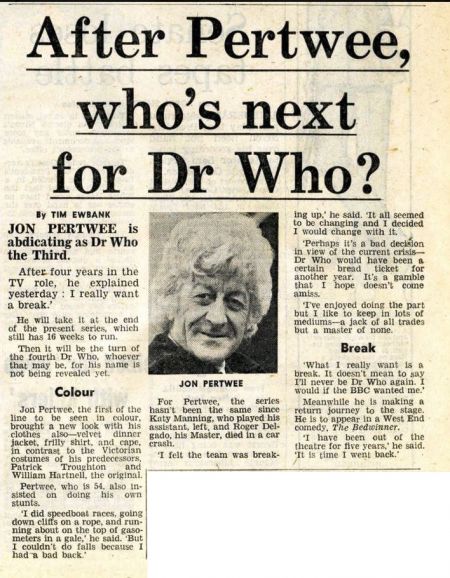 JON PERTWEE is abdicating as Dr Who the Third.

After four years in the TV role, he explained yesterday : I really want a break.'

He will take it at the end of the present series, which still has 16 weeks to run.

Then it will be the turn of the fourth Dr Who, whoever that may be, for his name is not being revealed yet.

Jon Pertwee. the first of the line to be seen in colour, brought a new look with his clothes also—velvet dinner Jacket, frilly shirt. and cape, in contrast to the Victorian costumes of his predecessors. Patrick Troughton and William Hartnell, the original.

Pertwee, who is 54, also insisted on doing his own stunts.

'I did speedboat races, going down cliffs on a rope, and running about on the top of gasometers in a gale, he said. 'But I couldn't do falls because I had a bad back.'

For Pertwee, the series hasn't been the same since Katy Manning, who played his assistant, left, and Roger Delgado, his Master, died in a car crash.

'I felt the team was breaking up,' he said. 'It all seemed to be changing and I decided I would change with it.

Perhaps it's a bad decision in view of the current crisis—Dr Who would have been a certain bread ticket for another year. It's a gamble that I hope doesn't come amiss.

'I've enjoyed doing the part but I like to keep in lots of mediums—a jack of all trades but a master of none.

'What I really want is a break. It doesn't mean to say I'll never be Dr Who again. I would if the BBC wanted me?

Meanwhile he is making a return journey to the stage. He is to appear in a West End comedy, The Bedwinner.

'I have been out of the theatre for five years,' he said. It is time I went back.'