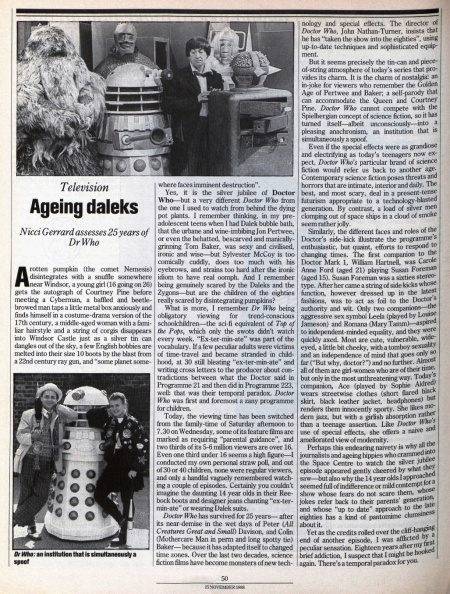 A rotten pumpkin (the comet Nemesis) disintegrates with a snuffle somewhere near Windsor, a young girl (16 going on 26) gets the autograph of Courtney Pine before meeting a Cyberman, a baffled and beetle-browed man taps a little metal box anxiously and finds himself in a costume-drama version of the 17th century, a middle-aged woman with a familiar hairstyle and a string of corgis disappears into Windsor Castle just as a silver tin can dangles out of the sky, a few English bobbies are melted into their size 10 boots by the blast from a 22nd century ray gun, and "some planet somewhere faces imminent destruction".

Yes, it is the silver jubilee of Doctor Who—but a very different Doctor Who from the one I used to watch from behind the dying pot plants. I remember thinking, in my preadolescent teens when I had Dalek bubble bath, that the urbane and wine-imbibing Jon Pertwee, or even the behatted, bescarved and manically-grinning Tom Baker, was sexy and civilised, ironic and wise—but Sylvester McCoy is too comically cuddly, does too much with his eyebrows, and strains too hard after the ironic idiom to have real oomph. And I remember being genuinely scared by the Daleks and the Zygons—but are the children of the eighties really scared by disintegrating pumpkins?

What is more, I remember Dr Who being obligatory viewing for trend-conscious schoolchildren—the sci-fi equivalent of Top of the Pops, which only the swots didn't watch every week. "Ex-ter-min-ate" was part of the vocabulary. If a few peculiar adults were victims of time-travel and became stranded in childhood, at 30 still bleating "ex-ter-min-ate" and writing cross letters to the producer about contradictions between what the Doctor said in Programme 21 and then did in Programme 223, well: that was their temporal paradox. Doctor Who was first and foremost a zany programme for children.

Today, the viewing time has been switched from the family-time of Saturday afternoon to 7.30 on Wednesday, some of its feature films are marked as requiring "parental guidance", and two thirds of its 5-6 million viewers are over 16. Even one third under 16 seems a high figure—I conducted my own personal straw poll, and out of 30 or 40 children, none were regular viewers, and only a handful vaguely remembered watching a couple of episodes. Certainly you couldn't imagine the daunting 14 year olds in their Reebock boots and designer jeans chanting "ex-termin-ate" or wearing Dalek suits.

Doctor Who has survived for 25 years— after its near-demise in the wet days of Peter (All Creatures Great and Small) Davison, and Colin (Mothercare Man in perm and long spotty tie) Baker— because it has adapted itself to changed time zones. Over the last two decades, science fiction films have become monsters of new technology and special effects. The director of Doctor Who, John Nathan-Turner, insists that he has "taken the show into the eighties", using up-to-date techniques and sophisticated equipment.

But it seems precisely the tin-can and piece-of-string atmosphere of today's series that provides its charm. It is the charm of nostalgia: an in-joke for viewers who remember the Golden Age of Pertwee and Baker; a self-parody that can accommodate the Queen and Courtney Pine. Doctor Who cannot compete with the Spielbergian concept of science fiction, so it has turned itself—albeit unconsciously—into a pleasing anachronism, an institution that is simultaneously a spoof.

Even if the special effects were as grandiose and electrifying as today's teenagers now expect, Doctor Who's particular brand of science fiction would refer us back to another age. Contemporary science fiction poses threats and horrors that are intimate, interior and daily. The best, and most scary, deal in a present-tense futurism appropriate to a technology-blasted generation. By contrast, a load of silver men clomping out of space ships in a cloud of smoke seem rather jolly.

Similarly, the different faces and roles of the Doctor's side-kick illustrate the programme's enthusiastic, but quaint, efforts to respond to changing times. The first companion to the Doctor Mark 1, William Hartnell, was Carole Anne Ford (aged 21) playing Susan Foreman (aged 15). Susan Foreman was a sixties stereotype. After her came a string of side kicks whose function, however dressed up in the latest fashions, was to act as foil to the Doctor's authority and wit. Only two companions—the aggressive sex symbol Leela (played by Louise Jameson) and Romana (Mary Tamm)—aspired to independent-minded equality, and they were quickly axed. Most are cute, vulnerable, wide-eyed, a little bit cheeky, with a tomboy sexuality and an independence of mind that goes only so far ("But why, doctor?") and no further. Almost all of them are girl-women who are of their time, but only in the most unthreatening way. Today's companion, Ace (played by Sophie Aldred) wears streetwise clothes (short flared black skirt, black leather jacket, headphones) but renders them innocently sporty. She likes modern jazz, but with a girlish absorption rather than a teenage assertion. Like Doctor Who's use of special effects, she offers a naive and ameliorated view of modernity.

Perhaps this endearing naivety is why all the journalists and ageing hippies who crammed into the Space Centre to watch the silver jubilee episode appeared gently cheered by what they saw—but also why the 14 year olds I approached seemed full of indifference or mild contempt for a show whose fears do not scare them, whose jokes refer back to their parents' generation, and whose "up to date" approach to the late eighties has a kind of pantomime clumsiness about it.

Yet as the credits rolled over the cliff-hanging end of another episode, I was afflicted by a peculiar sensation. Eighteen years after my first brief addiction, I suspect that I might be hooked again. There's a temporal paradox for you.

Caption: Dr Who: an institution that is simultaneously a spoof