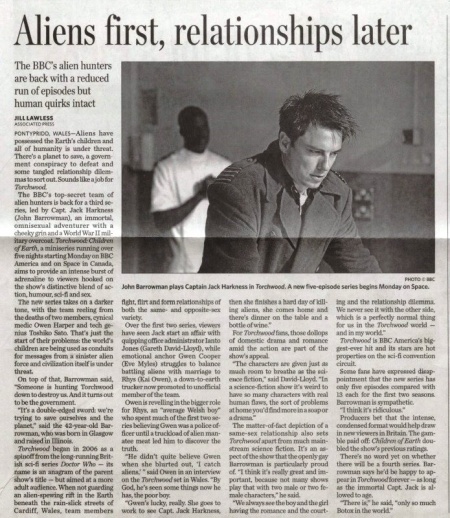 PONTYPRIDD, WALES—Aliens have possessed the Earth's children and all of humanity is under threat. There's a planet to save, a government conspiracy to defeat and some tangled relationship dilemmas to sort out. Sounds like a job for Torchwood.

The BBC's top-secret team of alien hunters is back for a third series, led by Capt. Jack Harkness (John Barrowman), an immortal, omnisexual adventurer with a cheeky grin and a World War II military overcoat. Torchwood: Children of Earth, a miniseries running over five nights starting Monday on BBC America and on Space in Canada, aims to provide an intense burst of adrenaline to viewers hooked on the show's distinctive blend of action, humour, sci-fi and sex.

The new series takes on a darker tone, with the team reeling from the deaths of two members, cynical medic Owen Harper and tech genius Toshiko Sato. That's just the start of their problems: the world's children are being used as conduits for messages from a sinister alien force and civilization itself is under threat

On top of that, Barrowman said, "Someone is hunting Torchwood down to destroy us. And it turns out to be the government.

"It's a double-edged sword: we're trying to save ourselves and the planet." said the 42-year-old Barrowman, who was born in Glasgow and raised in Illinois.

Torchwood began in 2006 as a spinoff from the long-running British sci-fi series Doctor Who — its name is an anagram of the parent show's title — but aimed at a more adult audience. When not guarding an alien-spewing rift in the Earth beneath the rain-slick streets of Cardiff, Wales, team members fight, flirt and form relationships of both the same and opposite-sex variety.

Owen is revelling in the bigger role for Rhys, an "average Welsh boy" who spent much of the first two series behaving Gwen was a police officer until a truckload of alien manatee meat led hint to discover the truth.

"He didn't quite believe Gwen when she blurted out, 'I catch aliens,'" said Owen in an interview on the Torchwood set in Wales. "By God, he's seen some thing now he has, the poor boy.

"Gwen's lucky, really. She goes to work to see Capt. Jack Harkness, then she finishes a hard day of killing aliens, she comes home and there's dinner on the table and a bottle of wine."

For Torchwood fans, those dollops of domestic drama and romance amid the action are part of the show's appeal.

"The characters are given just as much room to breathe as the science fiction; said David-Lloyd "In a science-fiction show it's weird to have so many characters with real human flaws, the sort of problems at home you'd trod more in a soap or a drama."

The matter-of-fact depiction of a same-sex relationship also sets Torchwood apart front much mainstream science fiction. It's an aspect of the show that the openly gay Barrowman is particularly proud of. "I think it's really great and important, because not many shows play that with two male or two female characters," he said.

"We always see the boy and the girl having the romance and the courting and the relationship dilemma We never see it with the other side, which is a perfectly normal thing for us in the Torchwood world — and in my world."

Torchwood is BBC America's biggest-ever hit and its stars are hot properties on the sci-fi convention circuit.

Santa fans haw expressed disappointment that the new series has only five episodes compared with 13 each for the Ent two seasons. Barrowman is sympathetic.

"I think it's ridiculous."

Producers bet that the intense, condensed format would help draw in new viewers in Britain. The gamble paid off: Children of Earth doubled the show's previous ratings There's no word yet on whether there will be a fourth series. Barrowman says he'd be happy to appear in Torchwood forever — as long as the immortal Capt. Jack is allowed to age.