Alison Graham On... Who's The Doctor 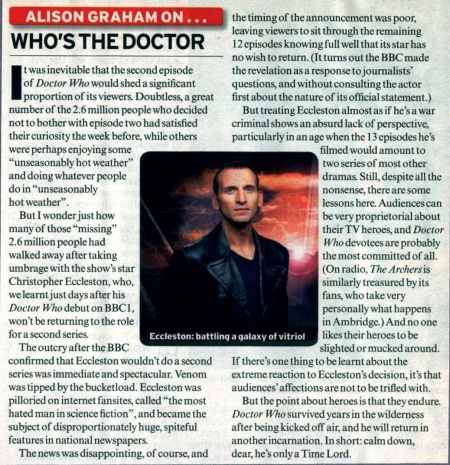 It was inevitable that the second episode of Doctor Who would shed a significant proportion of its viewers. Doubtless, a great number of the 2.6 million people who decided not to bother with episode two had satisfied their curiosity the week before, while others were perhaps enjoying some "unseasonably hot weather" and doing whatever people do in "unseasonably hot weather".

But I wonder just how many of those "missing" 2.6 million people had walked away after taking umbrage with the show's star Christopher Eccleston, who, we learnt just days after his Doctor Who debut on BBC1, won't be returning to the role for a second series.

The outcry after the BBC confirmed that Eccleston wouldn't do a second series was immediate and spectacular. Venom was tipped by the bucketload. Eccleston was pilloried on internet fansites, called "the most hated man in science fiction", and became the subject of disproportionately huge, spiteful features in national newspapers.

The news was disappointing, of course, and the timing of the announcement was poor, leaving viewers to sit through the remaining 12 episodes knowing full well that its star has no wish to return. (It turns out the BBC made the revelation as a response to journalists' questions, and without consulting the actor first about the nature of its official statement.)

But treating Eccleston almost as if he's a war criminal shows an absurd lack of perspective, particularly in an age when the 13 episodes he's filmed would amount to two series of most other dramas. Still, despite all the nonsense, there are some lessons here. Audiences can I be very proprietorial about

their TV heroes, and Doctor ) Who devotees are probably the most committed of all. (On radio, The Archers is similarly treasured by its fans, who take very personally what happens in Ambridge.) And no one likes their heroes to be slighted or mucked around. If there's one thing to be learnt about the extreme reaction to Eccleston's decision, it's that audiences' affections are not to be trifled with.

But the point about heroes is that they endure. Doctor Who survived years in the wilderness after being kicked off air, and he will return in another incarnation. In short: calm down, dear, he's only a Time Lord.