All about that doctor lark 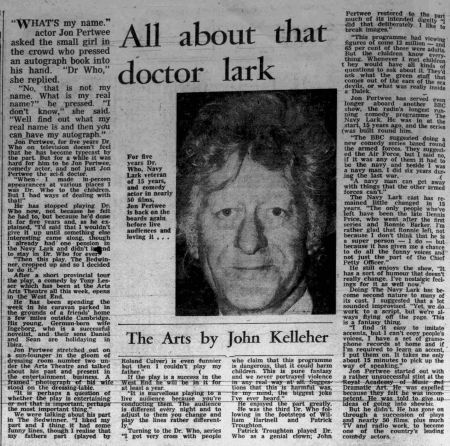 "WHAT'S my name," actor Jon Pertwee asked the small girl in the crowd who pressed an autograph book into his hand. "Dr Who," she replied.

"No, that is not my name. What is my real name?" he pressed. "I don't know," she said. "Well find out what my real name is and then yells can have my autograph."

Jon Pertwee, for five years Dr. Who on television doesn't feel that he has become typecast by the part But for a while it was hard for him to be Jon Pertwee, comedy actor, and not just Jon Pertwee the sci-fi doctor.

"When I made in-person appearances at various places I was Dr. Who to the children. But I had ways of dealing with that!"

He has stopped playing Dr. Who now, not because he felt he had to. but because he'd done it for five years and, as he explained, "I'd said that I wouldn't give it up until something el. Interesting came along, though I already had one pension in the Navy Lark and didn't intend to stay in Dr. Who for ever.

"Then this play. The Bedwinner cropped up and so I decided to do it."

After a short provincial tour the play, a comedy by 'Cony Lesser which has been at the Arts Arts Theatre all this week, opens ln the West End.

He has been spending the week in his caravan parked in the grounds of a friends' home a few miles outside Cambridge. His young, German-born wife Ingeborg, who is a successful novelist, and their sons Daniel and Sean are holidaying in Ibiza.

Jon Pertwee stretched out on a sun-lounger in the gloom of dressing room number two under the Arts Theatre and talked about his past and present in the entertainment business. A framed photograph of-his wife stood on the dressing-table.

"It is perhaps a question of whether the play is entertaining or not-that is important, perhaps" the most important thing."

We were talking about his part in The Bedwinner. "I liked my part and I thing it had some funny lines, though I realise that my fathers part (played by Roland Culver) is even funnier but then I couldn't play my father."

If the play in a success in the West End he will be in it for at least a year.

"It is marvellous playing to a live audience because you're conducting them. "The audience is different every night and to adjust to them you change and play the lines rather differently."

Turning to the Dr. Who, series "I got very cross with people who claim that this programme is dangerous, that it could harm children. This in pure fantasy and we never portrayed violence in any real way at all. Suggestions that this is harmful was to my mind, the biggest joke I've ever heard."

He enjoyed the part greatly. He was the third Dr. Who following in the footsteps of William Hartnell and Patrick Troughton.

Patrick Troughton played Dr. Who as a genial clown; John restored to the part much of its intended dignity "I did that deliberately. I like to break images."

"This programme had viewing figures of some 12 million - and 65 per cent of those were adults. But the children know everything. Whenever I met children they would have all kinds of questions to ask about it. They'd ask what the green stuff that comes out of the ears of the sea devils, or what was really inside a Dalek.

Jon Pertwee has served even longer aboard another BBC show, the radio's longest running comedy programme The Navy Lark. He was in at the start, 15 years ago, and the series was built round him.

"The BBC suggested doing new comedy series based round the armed forces. They suggested the Air Force, but I said no, if it was any of them it had to be the navy and beside I was a navy man. I did six years during the last war.

The Navy Lark cast has remained little changed in 15 years. "The only people who've left have been the late Dennis Price, who went after the first series and Ronnie Barker. I'm rather glad that Ronnie left, not because I don't think that he is a super person - I do - but because it has given me a chance to do all the funny voices and not just the part of the Chief Petty Officer."

He still enjoys the show, "It has a sort of humour that doesn't really change. I've nostalgic feelings for it as well now."

Doing The Navy Lark has become second nature to many of its cast- I suggested that a lot sounded improvised. "Yet, we do work to script, but we're always flying off the page. This is a fantasy thing.

"I find it easy to imitate accents, but I can't copy people's voices, I have a set of gramophone records at home and if I'm required to learn an accent, I put them on. It takes me only about 15 minutes to pick up the way of speaking."

Jon Pertwee started out with a rather unsuccessful stint at the Royal Academy of Music and Dramatic Art. He was expelled because they felt he was incompetent. He was told to give up ideas of going into showbiz.

But he didn't. He has gone on through a succession of plays and nearly 50 films. plus much TV and radio work, to become one of the country's leading comedy actors.

Caption: For five years Dr. Who, Navy Lark veteran of 15 years, and comedy actor in nearly 50 films, Jon Pertwee is back on the boards again before live audiences and loving it ...