An addiction to Dr. Who's world 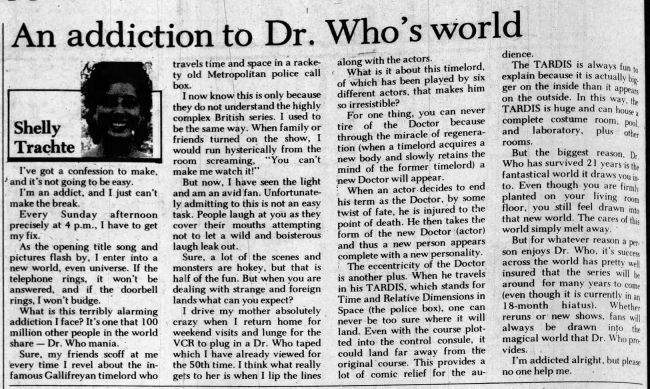 I've got a confession to make, and it's not going to be easy.

I'm an addict, and I just can't make the break.

Every Sunday afternoon precisely at 4 p.m., I have to get my fix.

As the opening title song and pictures flash by, I enter into a new world, even universe. If the telephone rings, it won't be answered, and if the doorbell rings, I won't budge.

What is this terribly alarming addiction I face? It's one that 100 million other people in the world share — Dr. Who mania.

Sure, my friends scoff at me every time I revel about the infamous Gallifreyan timelord who travels time and space in a rackety old Metropolitan police call box.

I now know this is only because they do not understand the highly complex British series. I used to be the same way. When family or friends turned on the show, I would run hysterically from the room screaming, "You can't make me watch it!"

But now, I have seen the light and am an avid fan. Unfortunately admitting to this is not an easy task. People laugh at you as they cover their mouths attempting not to let a wild and boisterous laugh leak out.

Sure, a lot of the scenes and monsters are hokey, but that is half of the fun.. But when you are dealing with strange and foreign lands what can you expect?

I drive my mother absolutely crazy when I return home for weekend visits and lunge for the VCR to plug in a Dr. Who taped which I have already viewed for the 50th time. I think what really gets to her is when I lip the lines along with the actors.

What is it about this timelord, of which has been played by six different actors, that makes him so irresistible?

For one thing, you can never tire of the Doctor because through the miracle of regeneration (when a timelord acquires a new body and slowly retains the mind of the former timelord) a new Doctor will appear.

When an actor decides to end his term as the Doctor, by some twist of fate, he is injured to the point of death. He then takes the form of the new Doctor' (actor) and thus a new person appears complete with a new personality.

The eccentricity of the Doctor is another plus. When he travels in his TARDIS, which stands for Time and Relative Dimensions in Space (the police box), one can never be too sure where it will land. Even with the course plotted into the control consule, it could land far away from the original course. This provides a lot of comic relief for the audience.

The TARDIS is always fun to explain because it is actually bigger on the inside than it appears on the outside. In this way, the TARDIS is huge and can house a complete costume room, pool, and laboratory, plus other rooms.

But the biggest reason, Dr. Who has survived 21 years is the fantastical world it draws you in. to. Even though you are firmly planted on your living room floor, you still feel drawn into that new world. The cares of this world simply melt away. But for whatever reason a person enjoys Dr. Who, it's success across the world has pretty well insured that the series will be around for many years to come (even though it is currently in an 18-month hiatus). Whether reruns or new shows, fans will always be drawn into the magical world that Dr. Who provides.

I'm addicted alright, but please no one help me.