And Capt. Jack is crackerjack 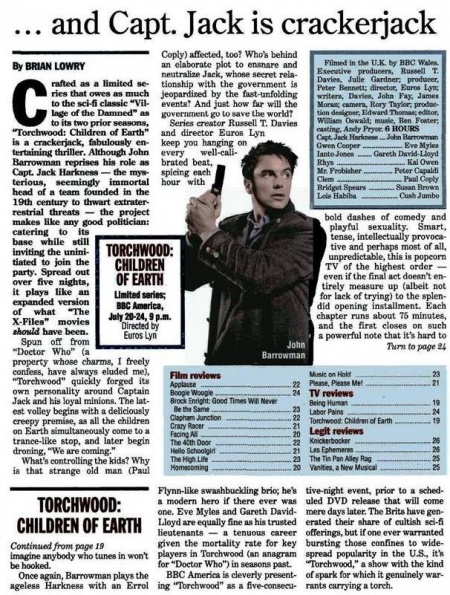 Crafted as a limited series that owes as much to the sci-fi classic "Village of the Damned" as to its two prior seasons, "Torchwood: Children of Earth" is a crackerjack, fabulously entertaining thriller. Although John Barrowman reprises his role as Capt Jack Harkness — the mysterious, seemingly immortal head of a team founded in the 19th century to thwart extraterrestrial threats — the project makes like any good politician: catering to its base while still inviting the uninitiated to join the party. Spread out over five nights, it plays like an expanded version of what "The X-Files" movies should have been.

Spun off from "Doctor Who" (a property whose charms, I freely confess, have always eluded me), "Torchwood" quickly forged its own personality around Captain Jack and his loyal minions. The latest volley begins with a deliciously creepy premise, as all the children on Earth simultaneously come to a trance-like stop, and later begin droning, "We are coming."

What's controlling the kids? Why is that strange old man (Paul Coply) affected, too? Who's behind an elaborate plot to ensnare and neutralize Jack, whose secret relationship with the government is jeopardized by the fast-unfolding events? And just how far will the government go to save the world?

Series creator Russell T. Davies and director Euros Lyn keep you hanging on every well-calibrated beat, spicing each hour with bold dashes of comedy and playful sexuality. Smart, tense, intellectually provocative and perhaps most of all, unpredictable, this is popcorn TV of the highest order —even if the final act doesn't entirely measure up (albeit not for lack of trying) to the splendid opening installment. Each chapter runs about 76 minutes, and the first closes on such a powerful note that it's hard to imagine anybody who tunes in won't be hooked.

Once again, Barrowman plays the ageless Harkness with an Errol Flynn-like swashbuckling brio; he's a modern hero if there ever was one. Eve Myles and Gareth David-Lloyd are equally fine as his trusted lieutenants — a tenuous career given the mortality rate for key players in Torchwood (an anagram for "Doctor Who") in seasons past. BBC America is cleverly presenting "Torchwood" as a five-consecutive-night event, prior to a scheduled DVD release that will come mere days later. The Brits have generated their share of coltish sci-fi offerings, but if one ever warranted bursting those confines to widespread popularity in the U.S., it's 'Torchwood," a show with the kind of spark for which it genuinely warrants carrying a torch.