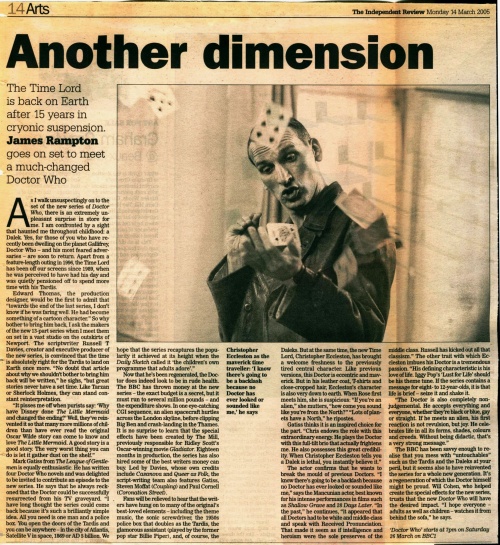 The Time Lord is back on Earth after 15 years in cryonic suspension.

As I walk unsuspectingly on to the set of the new series of Doctor Who, there is an extremely unpleasant surprise in store for me. I am confronted by a sight that haunted me throughout childhood: a Dalek. Yes, for those of you who have recently been dwelling on the planet Gallifrey, Doctor Who - and his most feared adversaries - are soon to return. Apart from a feature-length outing in 1996, the Time Lord has been off our screens since 1989, when he was perceived to have had his day and was quietly pensioned off to spend more time with his Tardis.

Edward Thomas, the production designer, would be the first to admit that "towards the end of the last series, I don't know if he was faring well. He had become something of a cartoon character." So why bother to bring him back, I ask the makers of the new 13-part series when I meet them on set in a vast studio on the outskirts of Newport. The scriptwriter Russell T Davies, creator and executive producer of the new series, is convinced that the time is absolutely right for the Tardis to land on Earth once more. "No doubt that article about why we shouldn't bother to bring him back will be written," he sighs, "but great stories never have a set time. Like Tarzan or Sherlock Holmes, they can stand constant reinterpretation.

"It pisses me off when purists say: 'Why have Disney done The Little Mermaid and changed the ending?' Well, they've reinvented it so that many more millions of children than have ever read the original Oscar 'Wilde story can come to know and love The Little Mermaid. A good story is a good story. The very worst thing you can do is let it gather dust on the shelf."

Mark Gatiss from The League of Gentlemen is equally enthusiastic. He has written four Doctor Who novels and was delighted to be invited to contribute an episode to the new series. He says that he always reckoned that the Doctor could be successfully resurrected from his TV graveyard. "I have long thought the series could come back because it's such a brilliantly simple idea. All you need is one man and a police box. You open the doors of the Tardis and you can be anywhere - in the city of Atlantis, Satellite V in space, 1869 or AD 5 billion. We hope that the series recaptures the popularity it achieved at its height when the Daily Sketch called it 'the children's own programme that adults adore'."

Now that he's been regenerated, the Doctor does indeed look to be in rude health. The BBC has thrown money at the new series - the exact budget is a secret, but it must run to several million pounds - and the expenditure shows. In one eye-catching CGI sequence, an alien spacecraft hurtles across the London skyline, before clipping Big Ben and crash-landing in the Thames. It is no surprise to learn that the special effects have been created by The Mill, previously responsible for Ridley Scott's Oscar-winning movie Gladiator. Eighteen months in production, the series has also hired some of the best writers money can buy. Led by Davies, whose own credits include Casanova and Queer as Folk, the script-writing team also features Gatiss, Steven Moffat (Coupling) and Paul Cornell (Coronation Street).

Fans will be relieved to hear that the writers have hung on to many of the original's best-loved elements - including the theme music, the sonic screwdriver, the 1950s police box that doubles as the Tardis, the glamorous assistant (played by the former pop star Billie Piper), and, of course, the Daleks. But at the same time, the new Time Lord, Christopher Eccleston, has brought a welcome freshness to the previously tired central character. Like previous versions, this Doctor is eccentric and maverick. But in his leather coat, T-shirts and close-cropped hair, Eccleston's character is also very down to earth. When Rose first meets him, she is suspicious: "If you're an alien," she mutters, "how come you sound like you're from the North?" "Lots of planets have a North," he ripostes.

Gatiss thinks it is an inspired choice for the part. "Chris endows the role with this extraordinary energy. He plays the Doctor with this full-tilt brio that actually frightens me. He also possesses this great credibility. When Christopher Eccleston tells you a Dalek is lethal, you instantly believe it."

The actor confirms that he wants to break the mould of previous Doctors. "I know there's going to be a backlash because no Doctor has ever looked or sounded like me," says the Mancunian actor, best known for his intense performances in films such as Shallow Grave and 28 Days Later. "In the past," he continues, "it appeared that all Doctors had to be white and middle-class and speak with Received Pronunciation. That made it seem as if intelligence and heroism were the sole preserves of the middle class. Russell has kicked out all that classism." The other trait with which Ec-cleston imbues his Doctor is a tremendous passion. "His defining characteristic is his love of life. Iggy Pop's 'Lust for Life' should be his theme tune. If the series contains a message for eight- to 12-year-olds, it is that life is brief - seize it and shake it.

"The Doctor is also completely nonjudgemental. He accepts everything and everyone, whether they're black or blue, gay or straight. If he meets an alien, his first reaction is not revulsion, but joy. He celebrates life in all its forms, shades, colours and creeds. Without being didactic, that's a very strong message."

The BBC has been savvy enough to realise that you mess with "untouchables" such as the Tardis and the Daleks at your peril, but it seems also to have reinvented the series for a whole new generation. It's a regeneration of which the Doctor himself might be proud. Will Cohen, who helped create the special effects for the new series, trusts that the new Doctor Who will have the desired impact. "I hope everyone adults as well as children - watches it from behind the sofa," he says.

'Doctor Who' starts at 7pm on Saturday 26 March on BBC1

Caption: Christopher Eccleston as the maverick time traveller: 'I know there's going to be a backlash because no Doctor has ever looked or sounded like me,' he says