Art gallery in an old warehouse 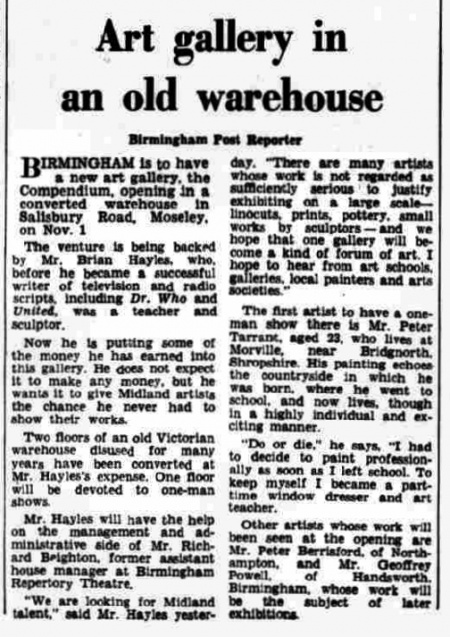 Birmingham is to have a new art gallery, the Compendium, opening in a converted warehouse in Salisbury Road, Moseley, on Nov. 1

The venture is being backed by Mr. Brian Hayles, who, before he became a successful writer of television and radio scripts, including Dr. Who and United, was a teacher and sculptor.

Now he is putting some of the money he has earned into this gallery. He does not expect it to make any money, but he wants it to give Midland artists the chance he never had to show their works.

Two floors of an old Victorian warehouse disused for many years have been converted at Mr. Hayles's expense. One floor will be devoted to one-man shows.

"We are looking for Midland talent," said Mr. Hayles yesterday. "There are many artists whose work is not regarded as sufficiently serious to justify exhibiting on a large scale-- linocuts, prints, pottery, small works by sculptors-- and we hope that one gallery will become a kind of forum for art. I hope to hear from art schools, galleries, local painters and arts societies."

The first artist to have a one-man show there is Mr. Peter Tarrant, aged 23 who lives at Morville, near Bridgnorth, Shropshire. His painting echoes the countryside in which he as born, where he went to school, and now lives, through a highly individual and exciting manner.

"Do or die," he says. "I had to decide to paint professionally as soon as I left school. To keep myself I became a part-time window dresser and art teacher.