Australian Setting in Dr. Who 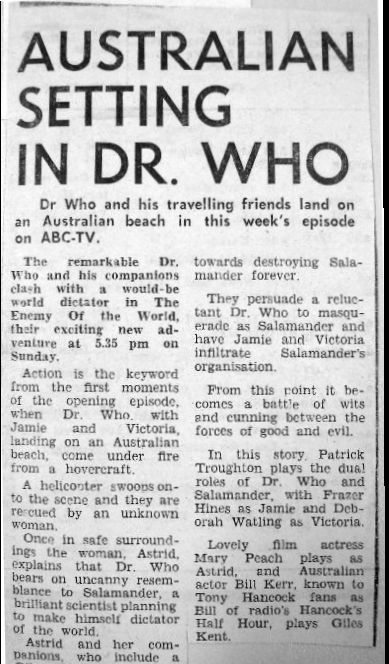 Dr Who and his travelling friends land on an Australian beach in this week's episode on ABC-TV.

The remarkable Dr. Who and his companions clash with a would-be world dictator in The Enemy Of the World, their exciting new adventure at 5.35 pm on Sunday.

Action is the keyword from the first moments of the opening episode, when Dr. Who. with Jamie and Victoria, landing on an Australian beach, come under fire from a hovercraft.

A helicopter swoons onto the scene and they are re: cued by an unknown woman.

Once in safe surroundings the woman, Astrid, explains that Dr. Who bears an uncanny resemblance to Salamander, a brilliant scientist planning to make himself dictator of the world.

Astrid and her companions, who include a Giles Kent, are working towards destroying Salamander forever.

They persuade a reluctant Dr. Who to masquerade as Salamander and have Jamie and Victoria infiltrate Salamander's organisation.

From this point it becomes a battle of wits end cunning between the forces of good and evil.

In this story, Patrick Troughton plays the dual roles of Dr. Who and Salamander, with Fraser Hines as Jamie and Deborah Watling as Victoria.