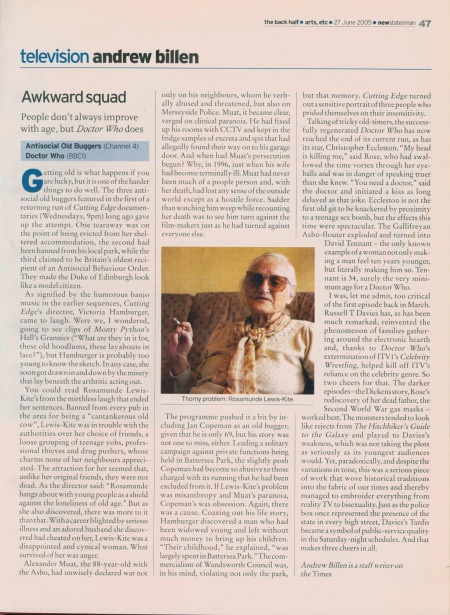 People don't always improve with age, but Doctor Who does

Getting old is what happens if you are lucky, but it is one of the harder things to do well. The three anti-social old buggers featured in the first of a returning run of Cutting Edge documentaries (Wednesdays, 9pm) long ago gave up the attempt. One tearaway was on the point of being evicted from her sheltered accommodation, the second had been banned from his local park, while the third claimed to be Britain's oldest recipient of an Antisocial Behaviour Order. They made the Duke of Edinburgh look like a model citizen.

As signified by the humorous banjo music in the earlier sequences, Cutting Edge's director, Victoria Hamburger, came to laugh. Were we, I wondered, going to see clips of Monty Python's Hell's Grannies ("What are they in it for, these old hoodlums, these layabouts in lace?"), but Hamburger is probably too young to know the sketch. In any case, she soon got drawn in and down by the misery that lay beneath the arthritic acting out.

You could read Rosamunde Lewis-Kite's from the mirthless laugh that ended her sentences. Banned from every pub in the area for being a "cantankerous old cow", Lewis-Kite was in trouble with the authorities over her choice of friends, a loose grouping of teenage yobs, professional thieves and drug pushers, whose charms none of her neighbours appreciated. The attraction for her seemed that, unlike her original friends, they were not dead. As the director said: "Rosamunde hangs about with young people as a shield against the loneliness of old age." But as she also discovered, there was more to it than that. With a career blighted by serious illness and an adored husband she discovered had cheated on her, Lewis-Kite was a disappointed and cynical woman. What survived of her was anger.

Alexander Muat, the 88-year-old with the Asbo, had unwisely declared war not only on his neighbours, whom he verbally abused and threatened, but also on Merseyside Police. Muat, it became clear, verged on clinical paranoia. He had fixed up his rooms with CCTV and kept in the fridge samples of excreta and spit that had allegedly found their way on to his garage door. And when had Muat's persecution begun? Why, in 1996, just when his wife had become terminally ill. Muat had never been much of a people person and, with her death, had lost any sense of the outside world except as a hostile force. Sadder than watching him weep while recounting her death was to see him turn against the film-makers just as he had turned against everyone else. View Image - Thorny problem: Rosamunde Lewis-Kite

The programme pushed it a bit by including Jan Copeman as an old bugger, given that he is only 69, but his story was not one to miss, either. Leading a solitary campaign against private functions being held in Battersea Park, the slightly posh Copeman had become so abusive to those charged with its running that he had been excluded from it. If Lewis-Kite's problem was misanthropy and Muat's paranoia, Copeman's was obsession. Again, there was a cause. Coaxing out his life story, Hamburger discovered a man who had been widowed young and left without much money to bring up his children. "Their childhood," he explained, "was largely spent in Battersea Park. " The commercialism of Wandsworth Council was, in his mind, violating not only the park, but that memory. Cutting Edge turned out a sensitive portrait of three people who prided themselves on their insensitivity.

Talking of tricky old-timers, the successfully regenerated Doctor Who has now reached the end of its current run, as has its star, Christopher Eccleston. "My head is killing me," said Rose, who had swallowed the time vortex through her eyeballs and was in danger of speaking truer than she knew. "You need a doctor," said the doctor and initiated a kiss as long delayed as that joke. Eccleston is not the first old git to be knackered by proximity to a teenage sex bomb, but the effects this time were spectacular. The Gallifreyan Asbo-flouter exploded and turned into David Tennant - the only known example of a woman not only making a man feel ten years younger, but literally making him so. Tennant is 34, surely the very minimum age for a Doctor Who.

I was, let me admit, too critical of the first episode back in March. Russell T Davies has, as has been much remarked, reinvented the phenomenon of families gathering around the electronic hearth and, thanks to Doctor Who's extermination of ITV1's Celebrity Wrestling, helped kill off ITV's reliance on the celebrity genre. So two cheers for that. The darker episodes-the Dickens story, Rose's rediscovery of her dead father, the Second World War gas masks worked best. The monsters tended to look like rejects from TAe Hitchhiker's Guide to the Galaxy and played to Davies's weakness, which was not taking the plots as seriously as its youngest audiences would. Yet, paradoxically, and despite the variations in tone, this was a serious piece of-work that wove historical traditions into the fabric of our times and thereby managed to embroider everything from reality TV to bisexuality. Just as the police box once represented the presence of the state in every high street, Davies's Tardis became a symbol of public-service quality in the Saturday-night schedules. And that makes three cheers in all.