BBC saves the Daleks from extermination 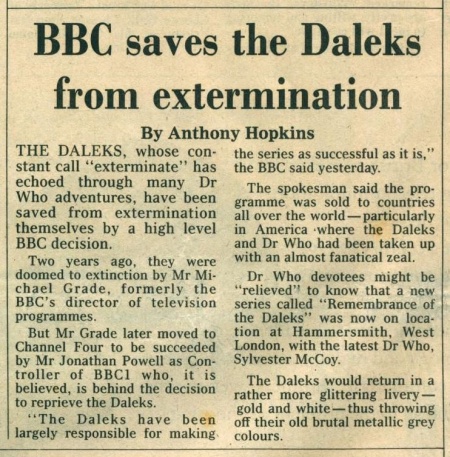 THE DALEKS, whose constant call "exterminate" has echoed through many Dr Who adventures, have been saved from extermination themselves by a high level BBC decision.

Two years ago, they were doomed to extinction by Mr Michael Grade, formerly the BBC's director of television programmes.

But Mr Grade later moved to Channel Four to be succeeded by Mr Jonathan Powell as Controller of BBC1 who, it is believed, is behind the decision to reprieve the Daleks.

"The Daleks have been largely responsible for making the series as successful as it is," the BBC said yesterday.

The spokesman said the programme was sold to countries all over the world—particularly in America where the Daleks and Dr Who had been taken up with an almost fanatical zeal.

Dr Who devotees might be "relieved" to know that a new series called "Remembrance of the Daleks" was now on location at Hammersmith, West London, with the latest Dr Who, Sylvester McCoy.

The Daleks would return in a rather more glittering livery—gold and white—thus throwing off their old brutal metallic grey colours.