Back to save New York (TV Times) 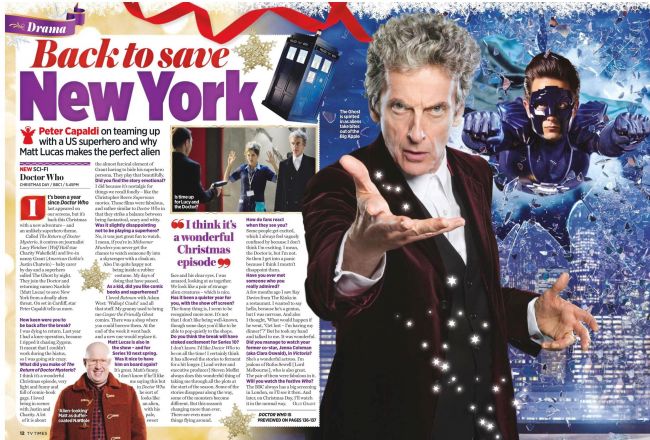 It's been a year since Doctor Who last appeared on our screens, but it's back this Christmas with a new adventure - and an unlikely superhero theme.

Called The Return of Doctor Mysterio, it centres on journalist Lucy Fletcher (Wolf Hall star Charity Wakefield) and live-in nanny Grant (American Gothic's Justin Chatwin) - baby carer by day and a superhero called The Ghost by night. They join the Doctor and returning cameo Nardole (Matt Lucas) to save New York from a deadly alien threat. On set in Cardiff, star Peter Capaldi tells us more.

How keen were you to be back after the break?

I was dying to return. Last year I had a knee operation, because I ripped it chasing Zygons. It meant that I couldn't work during the hiatus, so I was going stir crazy.

What did you make of The Return of Doctor Mysterio?

I think it's a wonderful Christmas episode, very light and funny and full of comic-book gags. I loved being in scenes with Justin and Charity. A lot of it is about the almost farcical element of Grant having to hide his superhero persona. They play that beautifully. Did you find the story emotional? I did because it's nostalgic for things we recall fondly - like the Christopher Reeve Superman movies. Those films were fabulous, and rather similar to Doctor Who in that they strike a balance between being fantastical, scary and witty.

Was it slightly disappointing not to be playing a superhero?

No, it was just great fun to watch. I mean, if you're in Midsomer Murders you never get the chance to watch someone fly into , a skyscraper with a cloak on. Also I'm quite happy not being inside a rubber costume. My days of doing that have passed.

As a kid, did you like comic books and superheroes?

I loved Batman with Adam West: 'Wallop! Crash!' and all that stuff. My granny used to bring me Casper the Friendly Ghost comics. There was a shop where you could borrow them. At the end of the week it went back and a new one would replace it.

Matt Lucas is also in the show - and for Series 10 next spring. Was it nice to have him on board again?

It's great. Matt's funny. I don't know if he'll like me saying this but in Doctor Who he sort of looks like an alien, with his pale, sweet face and his clear eyes. I was amazed, looking at us together. We look like a pair of strange alien creatures - which is nice.

Has it been a quieter year for you, with the show off screen? The funny thing is, I seem to be recognised more now. It's not that I don't like being well-known, though some days you'd like to be able to pop quietly to the shops.

Do you think the break will have stoked excitement for Series 10?

I don't know. I'd like Doctor Who to be on all the time! I certainly think it has allowed the stories to ferment for a bit longer. [Lead writer and executive producer] Steven Moffat always does this wonderful thing of taking me through all the plots at the start of the season. Some of the stories disappear along the way, some of the monsters become different. But this season's changing more than ever. There are even more things flying around.

How do fans react when they see you?

Some people get excited, which I always feel vaguely confused by because I don't think I'm exciting. I mean, the Doctor is, but I'm not. So then I get into a panic because I think I mustn't disappoint them.

Have you ever met someone who you really admired?

A few months ago I saw Ray Davies from The Kinks in a restaurant. I wanted to say hello, because he's a genius, but I was nervous. And also I thought, 'What would happen if he went, "Get lost - I'm having my dinner!"?' But he took my hand and talked to me. It was wonderful.

Did you manage to watch your former co-star, Jenna Coleman (aka Clara Oswald), in Victoria?

She's a wonderful actress. I'm jealous of Rufus Sewell [Lord Melbourne], who is also great. The pair of them were fabulous in it.

Will you watch the festive Who?

The BBC always has a big screening in London, so I'll see it then. And later, on Christmas Day, I'll watch it in the normal way.

Caption: The Ghost is spirited in as aliens take bites out of the Big Apple