Be afraid, be very afraid... The Daleks are coming back to a living room near you! 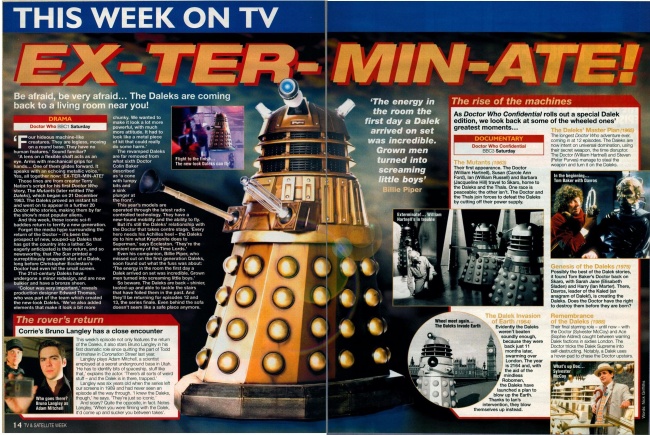 Four hideous machine-like creatures. They are legless, moving on a round base. They have no human features.' Sound familiar?

'A lens on a flexible shaft acts as an eye. Arms with mechanical grips for hands... One of them glides forward. It speaks with an echoing metallic voice.' Yes, all together now: 'EX-TER-MIN-ATE!'

Those lines are from creator Terry Nation's script for his first Doctor Who story, The Mutants (later retitled The Daleks), which began on 21 December 1963. The Daleks proved an instant hit and went on to appear in a further 20 Doctor Who stories, making them by far the show's most popular aliens.

And this week, these iconic sci-fi baddies return to terrify a new generation.

Forget the media hype surrounding the return of the Doctor - it's been the prospect of new, souped-up Daleks that has got the country into a lather. So eagerly anticipated is their return, and so newsworthy, that The Sun printed a surreptitiously snapped shot of a Dalek, long before Christopher Eccleston's Doctor had even hit the small screen.

The 21st-century Daleks have undergone a minor redesign, and are now bulkier and have a bronze sheen.

'Colour was very important,' reveals production designer Edward Thomas, who was part of the team which created the new-look Daleks. 'We've also added elements that make it look a bit more chunky. We wanted to make it look a lot more powerful, with much more attitude. It had to look like a metal piece of kit that could really do some harm.'

The revamped Daleks are far removed from what sixth Doctor Colin Baker described as 'a cone with lumpy bits and a sink plunger at the front'.

This year's models are operated through the latest radio controlled technology. They have a new-found mobility and the ability to fly.

But it's still the Daleks' relationship with the Doctor that takes centre stage. 'Every hero needs his Achilles heel - the Daleks do to him what Kryptonite does to Superman,' says Eccleston. 'They're the ancient enemy of the Time Lords.'

Even his companion, Billie Piper, who missed out on the first generation Daleks, soon found out what the fuss was about: 'The energy in the room the first day a Dalek arrived on set was incredible. Grown men turned into screaming little boys.'

So beware. The Daleks are back - shinier, tooled-up and able to tackle the stairs that have foiled them in the past. And they'll be returning for episodes 12 and 13, the series finale. Even behind the sofa doesn't seem like a safe place anymore.

This week's episode not only features the return of the Daleks, it also stars Bruno Langley in his first dramatic role since quitting the part of Todd Grimshaw in Coronation Street last year.

Langley plays Adam Mitchell, a scientist employed at a secret underground base in Utah. 'He has to identify bits of spaceship, stuff like that,' explains the actor. 'There's all sorts of weird stuff - and the Dalek is in there, trapped.'

Langley was six years old when the series left our screens in 1989 and had never seen an episode all the way through. 'I knew the Daleks, though,' he says. 'They're just so iconic.'

And scary? Quite the opposite, in fact. Notes Langley, 'When you were filming with the Dalek, it'd come up and sucker you between takes'.

Caption: Who goes there? Bruno Langley as Adam Mitchell

The rise of the machines

As Doctor Who Confidential rolls out a special Dalek edition, we look back at some of the wheeled ones' greatest moments...

Their first appearance. The Doctor (William Hartnell), Susan (Carole Ann Ford), Ian (William Russell) and Barbara (Jacqueline Hill) travel to Skaro, home to the Daleks and the Thals. One race is peaceable; the other isn't. The Doctor and the Thals join forces to defeat the Daleks by cutting off their power supply.

Evidently the Daleks weren't beaten soundly enough, because they were back just 11 months later, swarming over London. The year is 2164 and, with the aid of the mindless Robomen, the Daleks have launched a plan to blow up the Earth. Thanks to Ian's intervention, they blow themselves up instead.

The longest Doctor Who adventure ever, coming in at 12 episodes. The Daleks are now intent on universal domination, using their secret weapon, the time disruptor. The Doctor (William Hartnell) and Steven (Peter Purees) manage to steal the weapon and turn it on the Daleks.

Possibly the best of the Dalek stories, it found Tom Baker's Doctor back on Skaro, with Sarah Jane (Elisabeth Sladen) and Harry (Ian Marter). There, Davros, leader of the Kaled (an anagram of Dalek!), is creating the Daleks. Does the Doctor have the right to destroy them before they are born?

Their final starring role - until now - with the Doctor (Sylvester McCoy) and Ace (Sophie Aldred) caught between warring Dalek factions in sixties London. The Doctor tricks the Dalek Supreme into self-destructing. Notably, a Dalek uses a hover-pad to chase the Doctor upstairs.

In the beginning... Tom Baker with Davros

Flight to the finish... The new-look Daleks can fly!