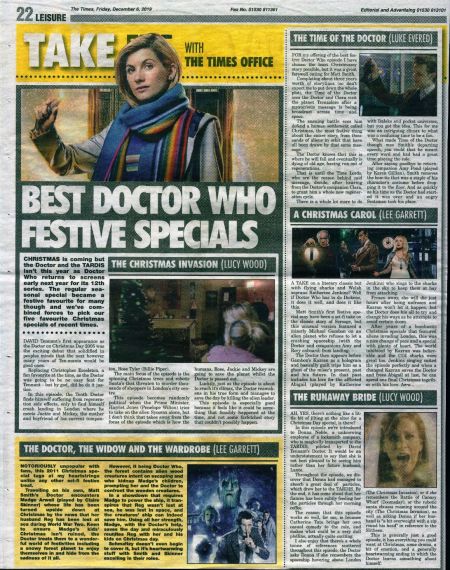 CHRISTMAS is coming but the Doctor and the TARDIS isn't this year as Doctor Who returns to screens early next year for its 12th series. The regular seasonal special became a festive favourite for many though and we've combined forces to pick our five favourite Christmas specials of recent times.

DAVID Tennant's first appearance as the Doctor on Christmas Day 2005 was the exciting debut that solidified in peoples minds that the next however many years of Ten-mania would be good ones.

Replacing Christopher Eccelston, a fan favourite at the time, as the Doctor was going to be no easy feat for Tennant - but by god, did he do it justice.

In this episode, the Tenth Doctor finds himself suffering from regeneration side effects, only to find himself crash landing in London where he meets Jackie and Mickey, the mother and boyfriend of his current companion, Rose Tyler (Billie Piper).

The main focus of the episode is the spinning Christmas trees and robotic Santa's that threaten to murder thousands of shoppers in London's city centre.

This episode becomes randomly political when the Prime Minister, Harriet Jones (Penelope Wilton) tries to take on the alien Sycorax alone, but I don't think that takes away from the focus of the episode which is how the humans, Rose, Jackie and Mickey are going to save the planet whilst the Doctor is passed out.

Luckily, just as the episode is about to reach it's climax, the Doctor reawakens in his true form and manages to save the day by killing the alien leader.

This episode is especially good because it feels like it could be something that feasibly happened at the time, and not some farfetched story that couldn't possibly happen.

THE DOCTOR, THE WIDOW AND THE WARDROBE (LEE GARRETT)

NOTORIOUSLY unpopular with fans, this 2011 Christmas special tugs at my heartstrings unlike any other sci-fi festive treat.

Travelling on his own, Matt Smith's Doctor encounters Madge Arwell (played by Claire Skinner) whose life has been turned upside down at Christmas by the news that her husband Reg has been lost at sea during World War Two. Keen to ensure Madge's kids' Christmas isn't ruined, the Doctor treats them to a wonderful world of festivities including a snowy forest planet to enjoy themselves in and hide from the sadness of it all.

However, it being Doctor Who, the forest contains alien wood creatures intent on escaping and who kidnap Madge's children, prompting her and the Doctor to confront the wooden creatures.

In a showdown that requires Madge to power the ship, it transpires that Reg wasn't lost at sea, he was lost in space, and the creatures' ship can indeed save him. Using all her strength, Madge, with the Doctor's help, saves the day and miraculously reunites Reg with her and his kids on Christmas day.

Schmaltzy doesn't even begin to cover it, but it's heartwarming stuff with Smith and Skinner excelling in their roles.

THE TIME OF THE DOCTOR (LUKE EVERED)

FOR my offering of the best festive Doctor Who episode I have chosen the least Christmassy story possible, but it was a great farewell outing for Matt Smith.

Completing about three years worth of storylines (so don't expect me to put down the whole plot), the Time of the Doctor sees the Doctor and Clara visit the planet Trenzalore after a mysterious message is being broadcast across time and space.

The ensuing battle sees him defend a human settlement called Christmas, the most festive thing about the entire story, from thousands of aliens in orbit that have all been drawn by that same message.

The Doctor knows that this is where he will fall and eventually is dying of old age, having run out of regenerations.

That is until the Time Lords, who are the reason behind said message, decide, after hearing from the Doctor's companion Clara, to grant him a whole new regeneration cycle.

There is a whole lot more to do with Daleks and pocket universes, but you get the idea. This for me was an intriguing climax to what was a confusing time to be a fan.

What made Time of the Doctor though was Smith's departing speech, you could that he meant every word and had had a great time playing the role.

After saying goodbye to returning companion Amy Pond (played by Karen Gillian), Smith removes the bow-tie that was a staple of his character's costume before dropping it to the floor. And as quickly as his time as the Doctor had started it was over and an angry Scotsman took his place.

A TAKE on a literary classic but with flying sharks and Welsh soprano Katherine Jenkins? Well if Doctor Who has to do Dickens, it does it well, and does it like this.

Matt Smith's first festive special may have been a sci-fi take on the classic story of Scrooge, but this unusual version featured a miserly Michael Gambon on an alien planet who refuses to let a crashing spaceship (with the Doctor and companions Amy and Rory onboard) from landing.

The Doctor then appears before Gambon's Kazran as a hologram and basically guilt trips him as a ghost of the miser's present, past and his future. In that past includes his love for the afflicted Abigail (played by Katherine Jenkins) who sings to the sharks in the sky to keep them at bay from attacking.

Frozen away, she will die just hours after being unfrozen and Kazran won't let it happen, but the Doctor does his all to try and change his ways as he attempts to avoid certain doom.

After years of a bombastic Christmas specials that featured aliens invading London, this was a nice change of pace and a special with plenty of heart. The world inhibited by Kazran was believable and the CGI sharks were great too. Jenkins singing suited the episode perfectly and when a changed Kazran saves the Doctor and frees Abigail at last, he can spend one final Christmas together with his love. Aww...

AH, YES, there's nothing like a little bit of jilting at the alter for a Christmas Day special, is there?

In this episode we're introduced to Donna Noble, a unknowing employee of a locksmith company, who is magically transported to the TARDIS, piloted by David Tennant's Doctor. It would be an understatement to say that she is not best pleased to be seeing him rather than her future husband, Lance.

Throughout the episode, we discover that Donna had managed to absorb a great deal of particles, which drew her to the TARDIS. By the end, it has come about that her fiancee has been subtly feeding her the particles through her morning coffee.

The reason that this episode works so well, for me, is because Catherine Tate brings her own casual comedy to the role, and makes what could be a very dull plotline, actually quite exciting.

I also enjoy that there's a whole tonne of references scattered throughout this episode, the Doctor asks Donna if she remembers the spaceship hovering above London (The Christmas Invasion), or if she remembers the Battle of Canary Wharf (Doomsday), or the robotic santa clauses roaming around the city (The Christmas Invasion), as well as asking Donna if her husband is "a bit overweight with a zip round his head" in reference to the Slitheen.

This is generally just a good episode, it has everything you could want at Christmas, some drama, a bit of emotion, and a generally heartwarming ending in which the Doctor learns something about himself.