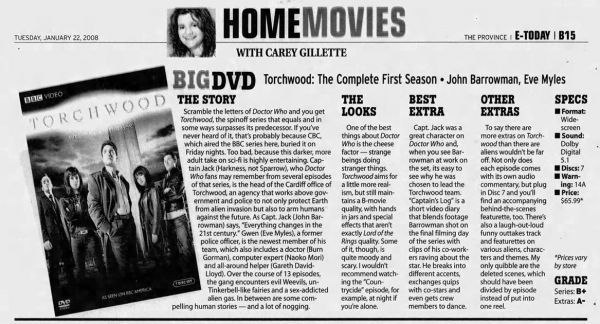 Scramble the letters of Doctor Who and you get Torchwood, the spinoff series that equals and in some ways surpasses its predecessor. If you've never heard of it, that's probably because CBC, which aired the BBC series here, buried it on Friday nights. Too bad, because this darker, more adult take on sci-fi is highly entertaining. Captain Jack (Harkness, not Sparrow), who Doctor Who fans may remember from several episodes of that series, is the head of the Cardiff office of Torchwood, an agency that works above government and police to not only protect Earth from alien invasion but also to arm humans against the future. As Capt. Jack (John Barrowman) says, "Everything changes in the 21st century." Gwen (Eve Myles), a former police officer, is the newest member of his team, which also includes a doctor (Burn Gorman), computer expert (Naoko Mori) and all-around helper (Gareth David-Lloyd). Over the course of 13 episodes, the gang encounters evil Weevils, un-Tinkerbell-like fairies and a sex-addicted alien gas. In between are some compelling human stories — and a lot of nogging.

One of the best things about Doctor Who is the cheese factor — strange beings doing stranger things. Torchwood aims for a little more realism, but still maintains a B-movie quality, with hands in jars and special effects that aren't exactly Lord of the Rings quality. Some of it, though, is quite moody and scary. I wouldn't recommend watching the "Countrycide" episode, for example, at night if you're alone.

Capt. Jack was a great character on Doctor Who and, when you see Barrowman at work on the set, it's easy to see why he was chosen to lead the Torchwood team. "Captain's Log" is a short video diary that blends footage Barrowman shot on the final filming day of the series with clips of his co-workers raving about the star. He breaks into different accents, exchanges quips with co-stars and even gets crew members to dance.

To say there are more extras on Torch-wood than there are aliens wouldn't be far off. Not only does each episode comes with its own audio commentary, but plug in Disc 7 and you'll find an accompanying behind-the-scenes featurette, too. There's also a laugh-out-loud funny outtakes track and featurettes on various aliens, characters and themes. My only quibble are the deleted scenes, which should have been divided by episode instead of put into one reel.