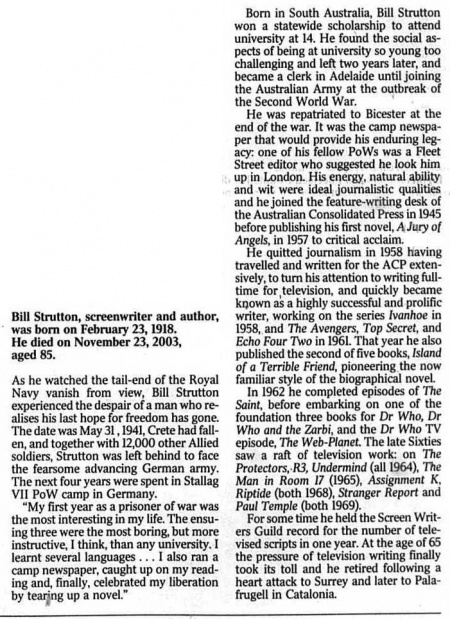 Bill Strutton, screenwriter and author, was born on February 23, 1918.

As he watched the tail-end of the Royal Navy vanish from view, Bill Strutton experienced the despair of a man who realises his last hope for freedom has gone.

The date was May 31 , 1941, Crete had fallen, and together with 12,000 other Allied soldiers, Strutton was left behind to face the fearsome advancing German army. The next four years were spent in Stallag VII PoW camp in Germany.

"My first year as a prisoner of war was the most interesting in my life. The ensuing three were the most boring, but more instructive, I think, than any university. I learnt several languages...I also ran a camp newspaper, caught up on my reading and, finally, celebrated my liberation by tearing up a novel."

Born in South Australia, Bill Strutton won a statewide scholarship to attend university at 14. He found the social aspects of being at university so young too challenging and left two years later, and became a clerk in Adelaide until joining the Australian Army at the outbreak of the Second World War.

He was repatriated to Bicester at the end of the war. It was the camp newspaper that would provide his enduring legacy: one of his fellow PoWs was a Fleet Street editor who suggested he look him up in London. His energy, natural ability and wit were ideal journalistic qualities and he joined the feature-writing desk of the Australian Consolidated Press in 1945 before publishing his first novel, A Jury of Angels, in 1957 to critical acclaim.

He quitted journalism in 1958 having travelled and written for the ACP extensively, to turn his attention to writing fulltime for television, and quickly became known as a highly successful and prolific writer, working on the series Ivanhoe in 1958, and The Avengers, Top Secret, and Echo Four Two in 1961. That year he also published the second of five books, Island of a Terrible Friend, pioneering the now familiar style of the biographical novel.

In 1962 he completed episodes of The Saint, before embarking on one of the foundation three books for Dr Who, Dr Who and the Zarbi, and the Dr Who TV episode, The Web-Planet. The late Sixties saw a raft of television work: on The Protectors, R3, Undermind (all 1964), The Man in Room 17 (1965), Assignment K, Riptide (both 1968), Stranger Report and Paul Temple (both 1969).

For some time he held the Screen Writers Guild record for the number of televised scripts in one year. At the age of 65 the pressure of television writing finally took its toll and he retired following a heart attack to Surrey and later to Palafrugell in Catalonia.