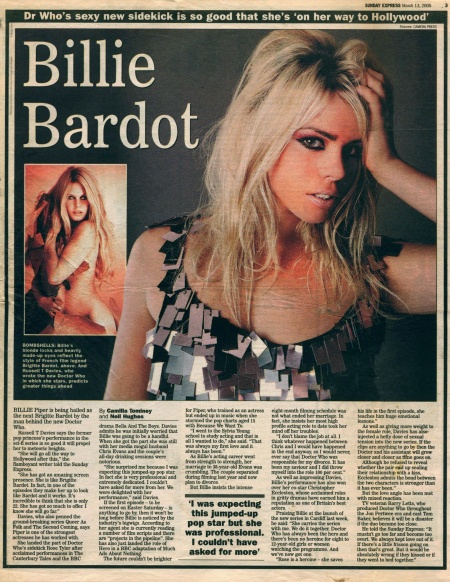 BILLIE Piper is being hailed as the next Brigitte Bardot by the man behind the new Doctor Who.

Russell T Davies says the former pop princess's performance in the sci-fi series is so good it will propel her to meteoric heights.

"She will go all the way to Hollywood after this," the flamboyant writer told the Sunday Express.

"She has got an amazing screen presence. She is like Brigitte Bardot. In fact, in one of the episodes they make her up to look like Bardot and it works. It's incredible to think that she is only 22. She has got so much to offer. I know she will go far"

Davies, who also penned the ground-breaking series Queer As Folk and The Second Coming, says Piper is one of the strongest actresses he has worked with.

She landed the part of Doctor Who's sidekick Rose Tyler after acclaimed performances in The Canterbury Tales and the BBC drama Bella And The Boys. Davies admits he was initially worried that Billie was going to be a handful. When she got the part she was still with her media mogul husband Chris Evans and the couple's all-day drinking sessions were notorious.

"She surprised me because I was expecting this jumped-up pop star. In fact she is very professional and extremely dedicated. I couldn't have asked for more from her. We were delighted with her performance," said Davies.

If the first episode - to be screened on Easter Saturday - is anything to go by, then it won't be long before Billie is noticed by the industry's bigwigs. According to her agent she is currently reading a number of film scripts and there are "projects in the pipeline". She has also just landed the role of Hero in a BBC adaptation of Much Ado About Nothing.

The future couldn't be brighter for Piper, who trained as an actress but ended up in music when she stormed the pop charts aged 15 with Because We Want To.

"I went to the Sylvia Young school to study acting and that is all I wanted to do," she said. "That was always my first love and it always has been."

As Billie's acting career went from strength to strength, her marriage to 38-year-old Evans was crumbling. The couple separated during filming last year and now plan to divorce.

But Billie insists the intense eight-month filming schedule was not what ended her marriage. In fact, she insists her most high profile acting role to date took her mind off her troubles.

"I don't blame the job at all. I think whatever happened between Chris and I would have happened in the end anyway, so I would never, ever say that Doctor Who was responsible for my divorce. It has been my saviour and I did throw myself into the role 100 per cent."

As well as impressing Davies, Billie's performance has also won over her co-star Christopher Eccleston, whose acclaimed roles in gritty dramas have earned him a reputation as one of Britain's best actors.

Praising Billie at the launch of the new series in Cardiff last week, he said: "She carries the series with me. We do it together. Doctor Who has always been the hero and there's been no heroine for eight to 12-year-old girls or women watching the programme. And we've now got one.

"Rose is a heroine - she saves his life in the first episode, she teaches him huge emotional lessons."

As well as giving more weight to the female role, Davies has also-injected a hefty dose of sexual tension into the new series. If the clips are anything to go by then the Doctor and his assistant will grow closer and closer as time goes on.

Although he refused to reveal whether the pair eid up sealing their relationship with a kiss, Eccleston admits the bond between the two characters is stronger than it has ever been."

But the love angle has been met with mixed reaction.

TV veteran Barry Letts, who produced Doctor Who throughout the Jon Pertwee era and cast Tom Baker, believes it will be a disaster if the duo become too close.

He told the Sunday Express: "It mustn't go too far and become too overt. We always kept love out of it. If there's a little frisson going on then that's great. But it would be absolutely wrong if they kissed or if they went to bed together"

Caption: BOMBSHELLS: Billie's blonde locks and heavily made-up eyes reflect the style of French film legend Brigitte Bardot, above. And Russell T Davies. who wrote the new Doctor Who In which she stars. predicts greater things ahead