Billie and I have on-screen chemistry 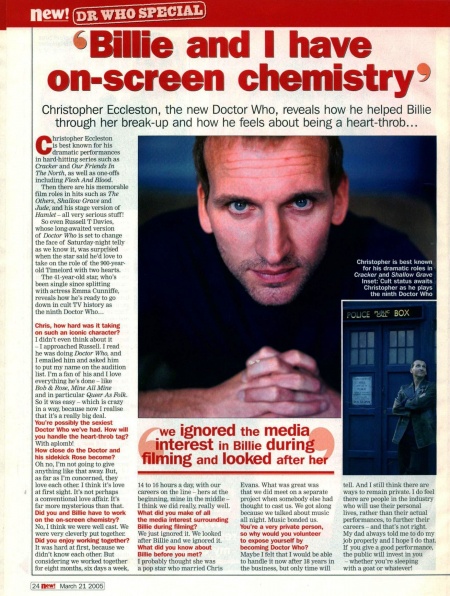 Christopher Eccleston, the new Doctor Who, reveals how he helped Billie through her break-up and how he feels about being a heart-throb...

Christopher Eccleston is best known for his dramatic performances in hard-hitting series such as Cracker and Our Friends In The North, as well as one-offs including Flesh And Blood.

Then there are his memorable film roles in hits such as The Others, Shallow Grave and Jude, and his stage version of Hamlet - all very serious stuff!

So even Russell T Davies, whose long-awaited version of Doctor Who is set to change the face of Saturday-night telly as we know it, was surprised when the star said he'd love to take on the role of the 900-year-old Timelord with two hearts.

The 41-year-old star, who's been single since splitting with actress Emma Cunniffe, reveals how he's ready to go down in cult TV history as the ninth Doctor Who...

Chris, how hard was it taking on such an iconic character?

I didn't even think about it I approached Russell. I read he was doing Doctor Who, and I emailed him and asked him to put my name on the audition list. I'm a fan of his and I love everything he's done - like Bob & Rose, Mine All Mine and in particular Queer As Folk. So it was easy - which is crazy in a way, because now I realise that it's a really big deal.

You're possibly the sexiest Doctor Who we've had. How will you handle the heart-throb tag?

How close do the Doctor and his sidekick Rose become?

Oh no, I'm not going to give anything like that away. But, as far as I'm concerned, they love each other. I think it's love at first sight. It's not perhaps a conventional love affair. It's far more mysterious than that.

Did you and Billie have to work on the on-screen chemistry?

No, I think we were well cast. We were very cleverly put together. Did you enjoy working together?

It was hard at first, because we didn't know each other. But considering we worked together for eight months, six days a week, 14 to 16 hours a day, with our careers on the line - hers at the beginning, mine in the middle I think we did really, really well.

What did you make of all the media interest surrounding Billie during filming?

I probably thought she was a pop star who married Chris

Evans. What was great was that we did meet on a separate project when somebody else had thought to cast us. We got along because we talked about music all night. Music bonded us.

You're a very private person, so why would you volunteer to expose yourself by becoming Doctor Who?

Maybe I felt that I would be able to handle it now after 18 years in the business, but only time will tell. And I still think there are ways to remain private. I do feel there are people in the industry who will use their personal lives, rather than their actual performances, to further their careers - and that's not right. My dad always told me to do my job properly and I hope I do that. If you give a good performance, the public will invest in you - whether you're sleeping with a goat or whatever!

Caption: Christopher is best known for his dramatic roles in Cracker and Shallow Grave Inset: Cult status awaits Christopher as he plays the ninth Doctor Who