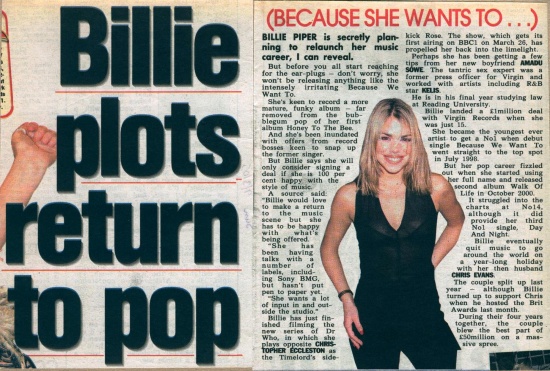 Billie plots return to pop (BECAUSE SHE WANTS TO ...)

BILLIE PIPER is secretly planning to relaunch her music career, I can reveal.

But before you all start reaching for the ear-plugs — don't worry, she won't be releasing anything like the intensely irritating Because We Want To.

She's keen to record a more mature, funky album — far removed from the bubblegum pop of her first album Honey To The Bee.

And she's been inundated with offers from record bosses keen to snap up the former singer.

But Billie says she will only consider signing a deal if she is 100 per cent happy with the style of music.

A source said: "Billie would love to make a return to the music scene but she has to be happy with what's being offered.

"She has been having talks with a number of labels, including Sony BMG, but hasn't put pen to paper yet.

"She wants a lot of input in and outside the studio."

Billie has just finished filming the new series of Dr Who, in which she plays opposite CHRISTOPHER ECCLESTON as the Timelord's sidekick Rose. The show, which gets its first airing on BBC1 on March 26, has propelled her back into the limelight.

Perhaps she has been getting a few tips from her new boyfriend AMADU SOWE. The tantric sex expert was a former press officer for Virgin and worked with artists including R&B star KELIS.

He is in his final year studying law at Reading University.

Billie landed a £1million deal with Virgin Records when she was just 15.

She became the youngest ever artist to get a No1 when debut single Because We Want To went straight to the top spot in July 1998.

But her pop career fizzled out when she started using her full name and released second album Walk Of Life in October 2000.

It struggled into the charts at No14, although it did provide her third No1 single, Day And Night.

Billie eventually quit music to go around the world on a year-long holiday with her then husband CHRIS EVANS.

The couple split up last year — although Billie turned up to support Chris when he hosted the Brit Awards last month. During their four years together, the couple blew the best part of £50million on a massive spree.