Boo Who for Kylie! 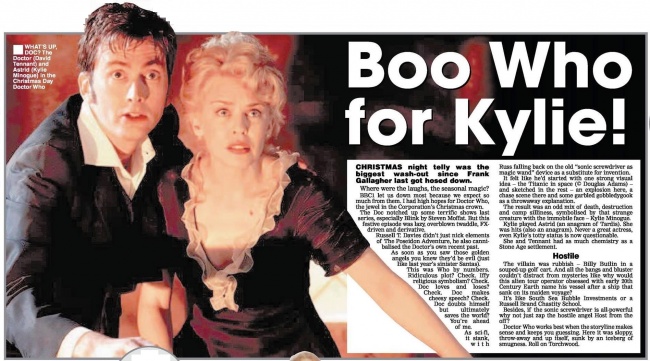 CHRISTMAS night telly was the biggest washout since Frank Gallagher last got hosed down.

Where were the laughs, the seasonal magic?

BBC1 let us down most because we expect so much from them. I had high hopes for Doctor Who, the jewel in the Corporation's Christmas crown.

The Doc notched up some terrific shows last series, especially Blink by Steven Moffat. But this festive episode was lazy, overblown twaddle, FX-driven and derivative.

Russell T. Davies didn't just nick elements of The Poseidon Adventure, he also cannibalised the Doctor's own recent past.

As soon as you saw those golden angels you knew they'd be evil (just like last year's sinister Santas). This was Who by numbers. Ridiculous plot? Check. Iffy religious symbolism? Check. Doc loves and loses? Check. Doc makes cheesy speech? Check. Doc doubts himself but ultimately saves the world? You're ahead of me.

As sci-fi, it stank, with Russ falling back on the old "sonic screwdriver as magic wand" device as a substitute for invention. It felt like he'd started with one strong visual idea - the Titanic in space (© Douglas Adams) and sketched in the rest - an explosion here, a chase scene there and some garbled gobbledygook as a throwaway explanation.

The result was an odd mix of death, destruction and camp silliness, symbolised by that strange creature with the immobile face - Kylie Minogue. Kylie played Astrid (an anagram of Tardis). She was hits (also an anagram). Never a great actress, even Kylie's totty status is now questionable.

She and Tennant had as much chemistry as a Stone Age settlement.

The villain was rubbish - Billy Butlin in a souped-up golf cart. And all the bangs and bluster couldn't distract from mysteries like why would this alien tour operator obsessed with early 20th Century Earth name his vessel after a ship that sank on its maiden voyage?

It's like South Sea Bubble Investments or a Russell Brand Chastity School.

Besides, if the sonic screwdriver is all-powerful why not just zap the hostile angel Host from the off?

Doctor Who works best when the storyline makes sense and keeps you guessing. Here it was sloppy, throw-away and up itself, sunk by an iceberg of smugness. Roll on Torchwood.

Caption: WHAT'S UP DOC? The Doctor (David Tennant) and Astrid (Kylie Minogue) in the Christmas Day Doctor Who

Additional keywords: Voyage of the Damned