Boom to bust and back again 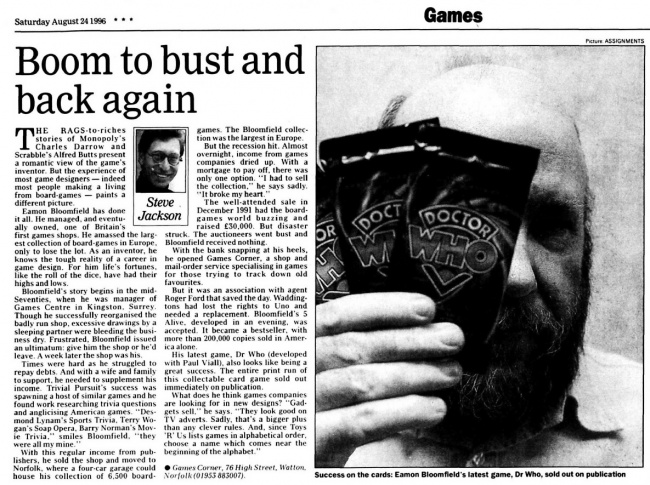 THE RAGS-to-riches stories of Monopoly's Charles Darrow and Scrabble's Alfred Butts present a romantic view of the game's inventor. But the experience of most game designers — indeed most people making a living from board-games — paints a different picture.

Eamon Bloomfield has done it all. He managed, and eventually owned, one of Britain s first games shops. He amassed the largest collection of board-games in Europe. only to lose the lot. AS an inventor, he knows the tough reality of a career in game design. For him life's fortunes. like the roll of the dice. have had their highs and lows.

Bloomfield's story begins in the mid-Seventies, when he was manager of Games Centre in Kingston, Surrey. Though he successfully reorganised the badly run shop. excessive drawings by a sleeping partner were bleeding the business dry. Frustrated. Bloomfield issued an ultimatum: give him the shop or he'd leave. A week later the shop was his.

Times were hard as he struggled to repay debts. And with a wife and family to support, he needed to supplement his income. Trivial Pursuit's success was spawning a host of similar games and he found work researching trivia questions and anglicising American games. "Desmond Lynam's Sports Trivia. Terry Wogan's Soap Opera, Barry Norman's Movie Trivia." smiles Bloomfield. "they were all my mine."

With this regular income from publishers, he sold the shop and moved to Norfolk, where a four-car garage could house his collection of 6,500 boardgames. The Bloomfield collection was the largest in Europe.

But the recession hit. Almost overnight, income from games companies dried up. With a mortgage to pay off, there was only one option. "I had to sell the collection," he says sadly. "It broke my heart."

The well-attended sale in December 1991 had the board-games world buzzing and raised £30,000. But disaster struck. The auctioneers went bust and Bloomfield received nothing.

With the bank snapping at his heels, he opened Games Corner, a shop and mail-order service specialising in games for those trying to track down old favourites.

But it was an association with agent Roger Ford that saved the day. Wadding-tons had lost the rights to Uno and needed a replacement. Bloomfield's 5 Alive, developed in an evening, was accepted. It became a bestseller, with more than 200,000 copies sold in America alone.

His latest game, Dr Who (developed with Paul Viall), also looks like being a great success. The entire print run of this collectable card game sold out immediately on publication.

What does he think games companies are looking for in new designs? "Gadgets sell," he says. "They look good on TV adverts. Sadly, that's a bigger plus than any clever rules. And, since Toys 'R' Us lists games in alphabetical order, choose a name which comes near the beginning of the alphabet."

Caption: Success on the cards: Eamon Bloomfield's latest game. Dr Who, sold out on publication