Boy Thought He Was a Dr. Who 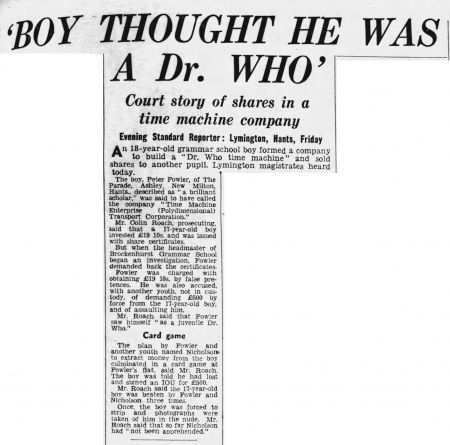 Court story of shares in a time machine company

An 18-year-old grammar school boy formed a company to build a "Dr. Who time machine" and sold shares to another pupil, Lymington magistrates heard today.

The boy, Peter Fowler, of The Parade, Ashley, New Milton, Hants.. described as " a brilliant scholar," was said to have called the company "Time Machine Enterprise (Polydimensional) Transport Corporation."

But when the headmaster of Brockenhurst Grammar School began an investigation, Fowler demanded back the certificates. Fowler was charged with obtaining £19 10s. by false pretences. He was also accused, with another youth, not in custody, of demanding £500 by force from the 17-year-old boy, and of assaulting him.

Mr. Roach said that Fowler saw himself "as a juvenile Dr. Who."

The plan by Fowler and another youth named Nicholson to extract money from the boy culminated in a card game at Fowler's flat, said Mr. Roach. The boy was told he had lost and signed an IOU for £500.

Once, the boy was forced to strip and photographs were taken of him in the nude. Mr. Roach said that so far Nicholson had "not been apprehended."